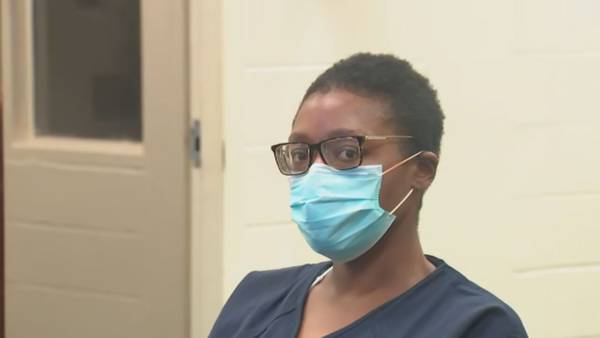 A woman was arrested Monday in connection with a triple shooting in Atlanta’s Midtown that killed two and injured one.

Raissa Kengne, 34, was located and taken into custody after authorities tracked her down at Hartsfield-Jackson Atlanta International Airport, CBS 46 reports. Witnesses and city cameras identified Kengne as the suspect behind the shooting spree at a high-rise condo building on West Peachtree Street.

SWAT teams and K9 units swarmed the area in response to reports of an active shooter. Kengne was arrested near the south baggage claim, and authorities recovered the firearm believed to have been used in the shooting.

The victims were identified as Wesley Freeman, 41, who died at the hospital, and Michael Shinners, 60, who died at the 1280 West Peachtree condominiums where the shooting spree occurred. The third victim, Mike Horne, remains in the intensive care unit (ICU) and will require additional surgeries, according to the condo property managers, Beacon Management Services.

“Micheal Shinners was an above and beyond building manager,” resident Brian Hall said.

“He was loved by our community. The events today are shocking and he can never be replaced. We are deeply saddened.”

Residents at the building recognized Kengne as someone who had lived there for five years. Kengne’s social media post might reveal her motive for the shooting.

The day before the violent attack, Kengne condemned the building management in a fiery LinkedIn post. She claimed her issues stemmed from alleged fraud from a former employer.

In a lawsuit Kengne filed against Georgia Power in June, other suits were mentioned, including one against several 1280 West management team members and the 1280 West board members for allegedly withholding the plaintiff’s mail, including mail from Georgia Power.

Kengne is charged with two counts of murder, three counts of aggravated assault, two counts of false imprisonment, and two counts of possession of a firearm during the commission of or attempt to commit certain felonies.