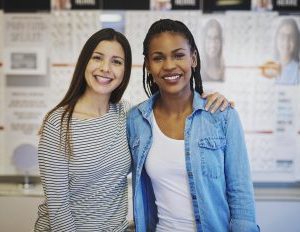 Young women are not sticking around to prove they deserve top positions in corporate America. Studies show that women are still underrepresented in managerial and senior positions. Millennial career women are, instead, looking to crash the glass ceiling from above–or break the concrete one that exists for black women and Latinas.

Almost nine of every 10 millennial female entrepreneurs are disrupting corporate convention by leaving corporate jobs to launch private businesses, according to Crash the Glass, an in-depth study by REAL, the insight consultancy that partners with several esteemed brands. What’s more, eight of every 10 millennial women entrepreneurs believe they have a competitive advantage running their companies as women.

The REAL study reports that “the ‘crash the glass’ philosophy reflects how entrepreneurial millennial women are more often disrupting traditional corporate culture by shattering the proverbial ceiling and building their own companies, taking on executive leadership roles, and driving brand and product innovation, which resonates with female consumers.â€

“We set out to understand how companies could better market to millennial women, and we walked away with a much more profound insight,” said Serena Saitas, founder of REAL, in a released statement. “Female entrepreneurship is a breeding ground for cultivating informed and empowered women. Many women who are not getting the chance to make an impact at a corporation are leaving and starting their own companies, where they can call the shots and make the impact they want to make.”

Other REAL findings: Only 27% surveyed define business success by profitability, while nearly half cite long-term goals, including creating a social impact.Â  Roughly 43% report they left their corporate jobs because “I was not following my passion.”

Female founders get only a tiny fraction of early stage funding, so, not surprisingly 74% of REAL women survey started their businesses with personal savings. Just 7% had access to crowdfunding.

An earlier report from DigitalunDivided, The Real Unicorns of Tech, revealed VC firms lend white men $1.3 million on average, even if their startups fail. In the past five years, black women received a negligible 0.002% of venture capital funding, while the number of black women starting businesses has more than tripled.