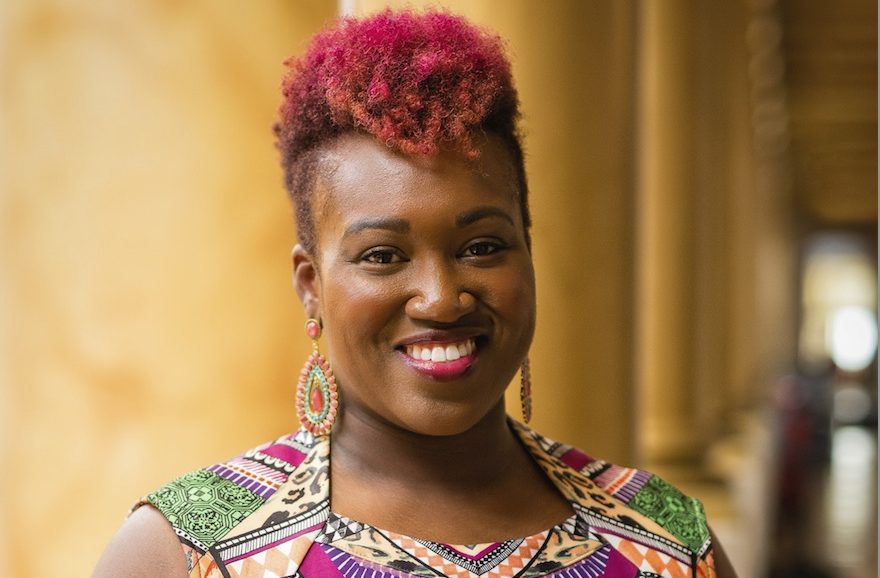 When Safiya J. Simmons came across an article titled “The Confidence Gap” which emphasized how self-doubt continues to hold women back in their careers—she felt an overwhelming desire to create a space where women are equipped to take their careers and lives to the next level.

“There are so many spaces telling women who they should be. For instance, there’s Sheryl Sandberg’s “Lean In,” which encourages women to lead rather than follow; the old familiar parenting styles: Tiger mom and helicopter mom, which spotlight’s the highly involved—super aggressive parent; as well as the Bible’s Proverbs 31 which details the attributes of a virtuous wife or ideal woman. I wanted to create a platform that gives women the space to decide who they want to be and how on their own terms” said Simmons. With that passion, Simmons created The Leap Luncheon Series, a chance for professional women to have open and honest conversations with influential women over a meal.

Simmons’ is not an event planner, but since 2015 her faith in God and passion to help women free themselves from the opinion of others, has helped her host power lunches in Washington, DC, and New York City. She’s been surprised by the caliber of women volunteering their time to support other women of color ages 18 and up, who are just about to enter the workforce, under-employed, and those starting second and entrepreneurial careers.

In the midst of planning the next Leap Luncheon on September 19, in Washington DC,  Black Enterprise sat down with Simmons to talk about the rules of society and self-limiting beliefs that hold many women back from taking their career to the next level.

You’ve hosted quite a few events, what have you been most surprised to learn about yourself?

I have been quite surprised by how much I’m learning about being a leader. I’m far from a perfect leader, but learning the art of delegation and trusting your team is something that I’m grateful for. I wouldn’t be able to pull off my luncheons without the ladies working with me. It’s a core group of women who help me with everything from venues to art to invitations. I’ve learned a lot about myself as a leader just by being obedient and doing these luncheons.

When it comes to women advancing in their careers, what do you believe many women overlook or underestimate as a tool to get ahead?

Sometimes we’re so focused on where we’re going that we overlook where we are. Whether you’re looking to start a business, get a promotion, or change careers, there’s something to be learned and gained where you are. Are there professional development and training opportunities? Can you find and secure a mentor or a sponsor where you are? Are there new responsibilities you can take on that will build your resume? Or can you begin to amass quantifiable and measurable wins that will build out your resume? Where you are is a critical part of where you’re headed. Milk it for all it’s worth!

What’s the traditional career advice that you believe is overrated?

“Find a good job with benefits and a W2, and stay there.” It’s overrated because we grow and change — if we’re lucky — nearly every day of our lives. The expectation that we’ll still get the same things out of our jobs that we did two or twenty years ago is erroneous and puts too much pressure on us to look for life where there may be none. The Bible says there’s a season for everything under the sun. Allow yourself to grow and change and see what works for who you are now. For me, that meant venturing into entrepreneurship. For others, that might mean going to a new company, pursuing a promotion, or looking for professional development opportunities. Give yourself permission to grow and change and then follow the direction of your passion — responsibly. I tell the Leap Ladies all the time, have a plan before you leap, no matter what your leap looks like. Don’t just jump out there. Be strategic and get ready to live your best life now!

It’s not until women define ourselves, for ourselves, that we’ll be able to assume our rightful places of power and influence in the boardroom, the bedroom, and every space in between. I believe in having radical faith and radical expectation. Nothing radical happens in a constrained space. The inspiration to be self-doubt. could begin in a box, but it’ll never flourish without space and an expectation of wonderful blessings.