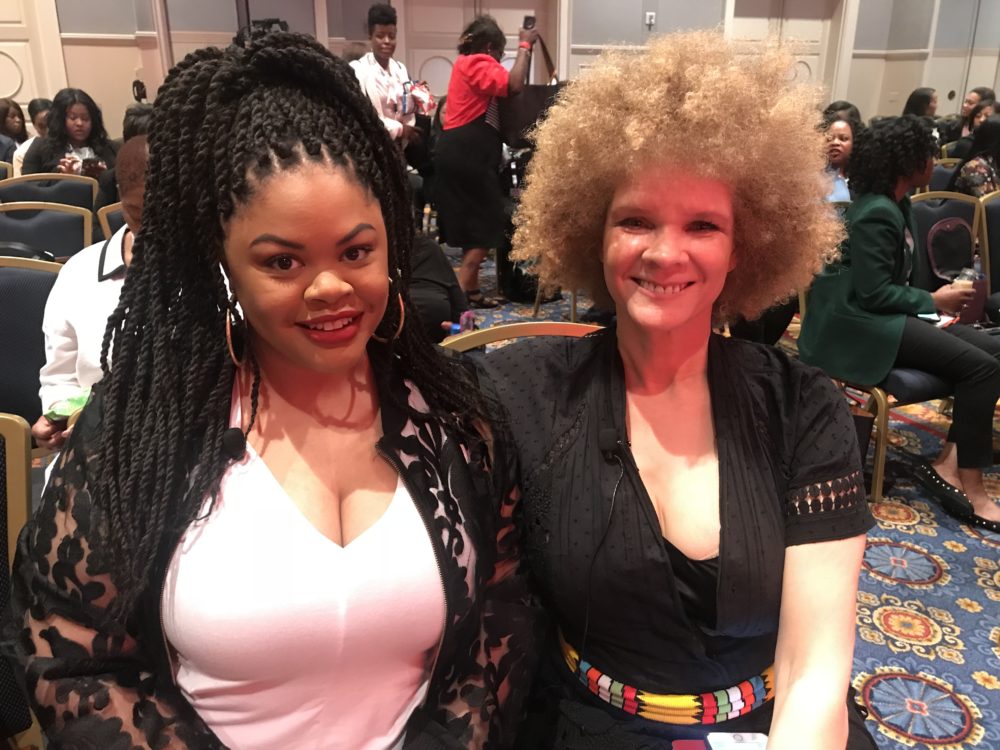 (Johnetta Elzie and Michaela Angela Davis get ready to speak on the #MeTOO, Now What? panelists.)

Just when we thought that the Women of Power Summit couldn’t get any better, day two in Orlando at Disney’s Beach & Yacht Resorts was one for the books! Early risers joined Uti Middleton, expert personal trainer and American Heart Association #GoRedGetFit fitness influencer, for a morning of movement at the Rhythm Rumble session that got their blood flowing and left them feeling energized.

But the real treat was Donna Brazile, a Legacy Award honoree who wowed women last night and did it again during her Conversations that Count chat with Caroline Clarke, editorial director of the Black Enterprise Women of Power Summit and Host of Women of Power TV. During her time on stage, Brazile shared her journey from New Orleans as a young girl to becoming a political leader and serving as the chair of the Democratic National Convention. And, her candor and sense of humor were to be admired.

She spoke candidly about her time at the DNC about her dedicating her life to being a change agent.

Later in the morning, Legacy Award honorees Edith Cooper, senior director at Goldman Sachs, and Glenda McNeal, president, Enterprise Strategic Partnerships at American Express Co., joined Debbie Dyson, ADP’s president of National Account Services and Client Experiences for an insightful discussion on the secrets of the C-suite and how they got and stayed there, presented by ADP.

Ladies were able to indulge in refreshments presented by PepsiCo and during the break attended the Sensations suite hosted by Toyota. And in the Power Lounge hosted by AT&T, women were able to explore different activations charge their phones so they could compete in our social media competition to enter to win an iWatch or Amazon Echo sponsored by ADP. There were also sponsored activations hosted by Accenture and State Farm.

Women were also able to participate in money makeover workshops hosted by Bank of America/Merrill Lynch to help them identify financial challenges and create financial plans. Other great and engaging learning opportunities included real conversations that covered the gender pay gap; intimate conversations about sexual harassment against women and the #MeToo movement led by activists Michaela Angela Davis and Johnetta Elzie; how to sit in the hot seat and not get burned and how to stay woke and stay employed.

In the afternoon, women reconvened for the Power Lunch hosted by Pfizer. And Legacy Award honoree Jayne Kennedy-Overton and her daughters Kopper Joi and Savannah Overton took the stage for a multigenerational conversation about life, relationships, success, and her next steps as a legendary career woman. Women were moved by the conversation and are expect great things from Kennedy-Overton as she relaunches her career.

After filling their minds, bodies, and souls with good food and great information, women joined sessions on how to manage their money and financial well-being with CNBC’s financial journalist Sharon Epperson, hosted by Bank of America/Merrill Lynch. Women interested in business and the haircare industry joined Courtney Adeleye, CEO of The Mane Choice and Alfred Edmond Jr., for a one-on-one conversation presented by Walmart.

Throughout the course of the day, women were able to attend executive career group coaching on how to find time to lead, on how others really view them, and one of the most profound sessions was on how to climb through crises. The evening turned up with a jam-packed girls night and after-hours conversation with Chaka Pilgrim, president of Roc Nation and music courtesy of DJ Niena Drake.

See all of the amazing photos and the livestream: here