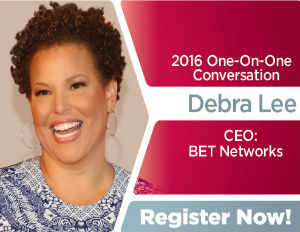 Women of Power attendees will be pleased to know that the exceedingly accomplished businesswoman, Debra L. Lee, will be in attendance at the 2016 Women of Power Summit, March 9Â -12, Hollywood, Florida.

[Related: [Women of Power] Know Your Worth: Building Your Wealth]

Lee will be sitting alongside Caroline Clarke, editorial director and Black Enterprise Women of Power Summit, host, Women of Power TV, for a one-on-one conversation.

Lee is currently the chairman and chief executive officer of BET Networks. Since acquiring her role as CEO of BET, Lee has increased the network’s budget by 50% and incorporated fresh, relevant programming into the network. Lee can be charged with redesigning the BET brand and cultivating a network that looks to support families, reveal fresh talent, and encourage dreams. She also created entertainment network CENTRIC, as yet another outlet for African American movies, shows, and music.

In addition to a growing number of career accolades Lee may add trailblazer to the list, as she received the Distinguished Vanguard Award for Leadership from the National Cable Television Association, making her the first African American female executive to be regarded with this honor.

Prior to embarking on an accelerated media career, Lee earned a master’s degree in public policy at the John F. Kennedy School of Government, Harvard University, and a juris doctorate at Harvard Law School.

Join in conversation with Debra Lee and Caroline Clarke at the 2016 Black Enterprise Women of Power Summit, March 9-12, 2016, Hilton Diplomat Resort & Spa, Hollywood, Florida. This conversation will stem from this year’s summit focus on knowing your worth, owning your truth, and embracing your power. Register now.

Follow Black Enterprise on social media @BlackEnterprise for Women of Power news, highlights, and updates. Use hashtag #BEWPS to stay in the loop. Be on the lookout at BlackEnterprise.com, as speakers, activities, and sessions are announced.