4 Women Who Are Changing the Landscape of Television 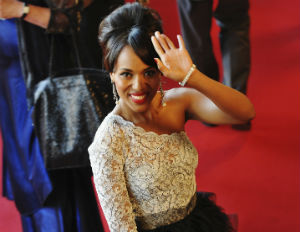 While Hollywood still has a long way to go before achieving fair representation in front of the camera and behind-the-scenes, there are a few women who are working to change the landscape of television one business deal at a time.

With Shonda Rhimes being proof that a proper production deal can lead to diversity and greater ratings, more of Hollywood’s hit players are starting to explore the opportunities offered on the small screen.

Below are four women whose recent production deals we hope will move us one step closer to equal opportunities in media.

1. Kerry Washington: Last month, it was reported that Scandal star Kerry Washington signed a two-year deal with ABC Studios and its cable/digital division ABC Signature Studios, for her recently launched production company Simpson Street. Under the deal, Washington and her business partner, Sharla Sumpter Bridgett, will develop broadcast, cable and digital projects exclusively for the network.

2. Mara Brock Akil: Last year it was announced that Mara Brock Akil and her husband Salim Akil signed a production deal with Warner Bros. TV through their company Akil Productions. The new deal will officially kick off in May 2016 with Mara transitioning from showrunner of BET’s Being Mary Jane to executive consultant.

4. Viola Davis:Â How to Get Away with Murder star Viola Davis has inked a production deal with ABC Studios and ABC Signature Studios. Under the deal, her company JuVee Production, which was founded alongside her husband Julius Tennon, will develop new projects for broadcast, cable, streaming services and digital platforms.

“We started JuVee because we wanted to see narratives that reflected our multi-ethnic and multifaceted culture,” Variety reports Davis saying. “We wanted to be a part of classic storytelling, and we didn’t want to wait.”