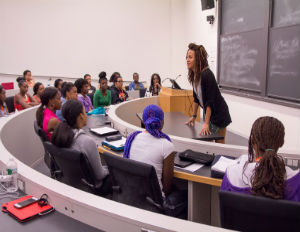 Jacqueline Glass is the founder of the 501(c)(3) nonprofit, At the Well Conferences Inc., which holds one-day conferences and, on the campus of Princeton University, a two-week leadership academy that empowers high school girls and transforms their lives.

A graduate of Princeton Theological Seminary, Glass received a master of divinity in 2003. Her faith was the impetus for founding the nonprofit six years later. “Even the name alludes to the Samaritan woman who met Jesus at the well.â€

Although the conferences and academy are academic, not religious, the well is a metaphor for being refreshed, rejuvenated, and “getting the things we need,â€ she says.

Glass is determined to provide a safe space for bright girls of color where their brilliance can be validated and nurtured.

“Just being on the campus opens their mind and expands their perspective,â€ Glass says. “Girls go back to their schools and ask for more advanced math. They challenge their schools to give them more of what they need to succeed.â€

The only program for minority girls on an Ivy League campus, the At the Well Young Women’s Leadership Academy gives its participants college-level work. “They hear brilliant guest speakers and learn how to interpret readings that cause them to look at the world differently.â€

To be accepted, girls must have a minimum 3.0 GPA; they must also provide two letters of recommendation and write a two-page essay on a given topic.

Girls come from all over to attend the New Jersey-based program: Hawaii, Texas, and California. At the Well has partnered with the embassy of Jamaica and included 11 girls from Jamaica one year. It has also received calls from South Africa and Ghana.

The organization has partnered with Jack and Jill and A Better Chance as well.

“Chris Rock and his wife actually came one year with his niece and stayed for practically the whole orientation,â€ Glass says.

The cost to attend is steep–$2,495–but Glass says need-based scholarships of up to $1,500 have been provided in the past. “We’re focusing on fundraising this year so we can offer more scholarships.â€ The cost includes room and board and a Broadway play.

At the Well is still receiving applications for this year’s summer program, which maxes out at 75 girls, so hurry if you want to be one of them.

“Our girls love the program. Alums want to come back and start a mentorship component.â€

To apply, go to At the Well. The application deadline is March 31.