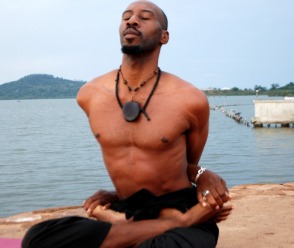 Imani means faith in Swahili and it’s an apropos name for today’s Yogapreneur, Pablo Imani. After holding down a plethora of jobs and surviving a death defying car accident, he decided he had to venture out and synergize his yearning for entrepreneurship and love of yoga.

Creating his own form called Afrikan Yoga, Imani has sparked interest in cities all over the world and has amassed a following in London and Ghana with plans to venture to the US. His book, Afrikan Yoga. A Practical Guide to Wellbeing Through Smai Posture, Breath and Meditation, was well-received and he has been featured in the popular yoga magazines such as Om and Yoga & Health.

Pablo believes that “people in the yoga space are ready to be refreshedâ€ and we believe he is someone to make that happen making him a clear choice for this year’s Yogapreneur series.

Well-being as an industry is suited to me, as I was already a vegetarian and trained as a masseur, well-being consultant and a yoga teacher.

Something unexpected happened to change the course of my life: I had an head-on collision with a vehicle twice the size of my car. I walked away from that incident with only a few scratches. My children were also saved except for my 2 year old daughter, who had to be rushed to the hospital for an emergency operation or else she would have died. I felt immediately that my ability to walk away from the collision was due to divine providence and my yoga practice. There was something I had to do on this planet. I gave up working my 9 to 5 job and [decided to] teach Afrikan Yoga full time – rain or shine. I did not choose this path it chose me.

I have found steady increase and growth with Afrikan Yoga after doing some weeding in the first 2 years. The journey is still very much about building awareness, developing a strong team that can drive the brand forward and outward and now the development of services and products.

A brand of yoga named Afrikan Yoga is going to need a push and patience, as I am presenting a yogic form from an African perspective that is both ancient and cutting edge.

I began with building the brand using social media and making note of where the interest is. Other leaders in business and marketing came forward and helped me develop a team as they saw the potential of Afrikan Yoga and felt the need to assist me in reaching the fullest potential. The greatest resource is word of mouth. The endorsements and testimonials are priceless and we use them continuously to grow our business.

What are some of the challenges you face being a man of African descent in the Yoga space, if any?

The main challenges have been accessing ‘mainstream’ studios even though once Afrikan Yoga is tried, people enjoy it. This practice engages people from all walks of life and from all over the world. There are a few barriers regarding people’s fixed perception of yoga just coming from India and not taking into account that people from ancient times had their particular methods of connecting to source. The challenge transforms into an opportunity to re-educate.