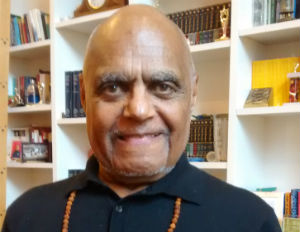 Bob Moses, a lion of the civil rights movement who helped to secure voting rights for black people in Mississippi; the seat of the nation’s most virulent racial hatred in the 1960’s, saw early on the inherent social justice in mathematical mastery.

In 1982, Moses founded the Algebra Project, an initiative that teaches math empowerment to middle schoolers of color to position them to take a college-prep math sequence in high school. He has since overseen the development of the Young People’s Project, an outgrowth of the Algebra Project that is directed by his daughter, Maisha Moses.

Last Sunday, I had the distinct privilege of meeting Bob and Maisha at a fundraising salon held at the home of longtime friends and supporters. YPP is doing wonderful work. It recruits youngsters 14 and up to teach recreational math after school to children in grades three through five. Of course, it’s also teaching planning and leadership skills, math competence, and responsibility. In New York, YPP meets at two sites and pulls in kids who attend a variety of schools. The teachers, called MLW’s for Math Literacy Workers, teach twice a week; Fridays are reserved for lesson planning.

I met three teens, Diamnique Hierrezvieo, 15; Yeidy David, 14, and Noeliz Melo, also 14; all MLW’s. Their involvement has made an impact on their lives. “I am now happier, more positive, and more outgoing,â€ Noeliz said. “I’m more confident in my schoolwork, I pay more attention, and I participate more in class.â€ Noeliz hopes to be a psychotherapist when she grows up.

Across the country, YPP has 500 high school students teaching math to 2,000 elementary school pupils in a way that is low-stress, informal, even playful, yet the results speak for themselves. According to internal and external assessments from 1997 to 2014, YPP involvement has improved test scores and increased mathematical confidence. In 2003, Algebra Project/YPP students in Jackson, Mississippi, were found to enroll in ninth and 10th grade math courses at a significantly higher rate; enroll in college preparatory math courses at twice the rate, and pass state math exams at significantly higher rates.

In 2006, MLW’s had more future math plans, more college math plans, and less math self-doubt. Notably, a positive relationship was found between math self-confidence, personal agency, and commitment to societal involvement. In 2007, the test scores of fourth-grade students working with MLW’s in Cambridge, Massachusetts, saw increases in proficient and advanced MCAS scores, as well as needs improvement scores, and a decrease in failing scores. Most recently, in 2012—2014, third-grade students at the Higginson Lewis School in Boston increased math scores by 11 points after working with MLW’s–the third highest increase in the Boston Public School district. YPP operates several sites nationwide, including Chicago and Eldorado, Illinois; Miami, Florida, and Atlanta, Georgia.

The social justice aim of the program is not insignificant. Bob Moses made clear the consequences of not having a sound mathematical education. “In a knowledge-based society, without a knowledge-based education there is no work for you that can maintain and support a family. You then become vulnerable to the criminal justice system, because there is no other place for you.â€

He skillfully wove together the threads of conversation, from the teens in the program, who spoke of YPP’s family-like atmosphere and the burden and responsibility of the work; to former Freedom Riders who lamented the state of race relations in the U.S. today. But somehow it all came back to the necessity of attaining mathematical competence and numeracy in order to create a space for ourselves in this 21st-century technological society.

For more about YPP, to donate, or to volunteer, go to typp.org.