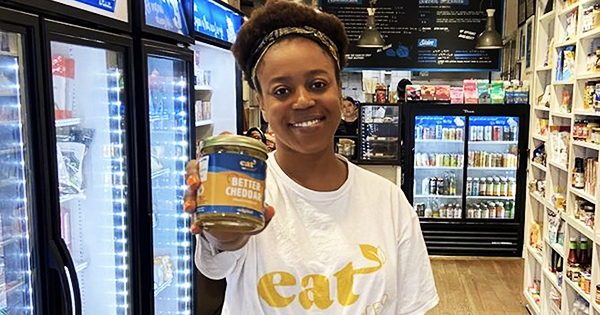 Meet Dianna King, a software engineer and food connoisseur from Atlanta, Ga., who is also the co-founder and CEO of Eat UNrestricted, one of few lines of plant-based vegan cheese products owned by an African American woman.

As hundreds of thousands of people switch to plant-based diet plans, vegan cheese is occupying a large portion of the overall vegan product sales. According to research conducted by Future Market Insights, the demand for vegan consumer packaged goods (CPG) is enormous while the supply cannot catch its rapidly growing popularity.

Diane says that she wants to tackle this issue with her brand which is dedicated to providing the best quality products for veganism enthusiasts, people with food allergies, and anyone who wants to improve their health.

A graduate of Georgia Institute of Technology with a bachelor degree in electrical engineering, Dianna’s profession lies in engineering, but she says that she was a food connoisseur before anything else. She says that a good part of the inspiration behind founding Eat UNrestricted is to present actionable solutions to the rising demand for healthy, quality, vegan products. Her qualities as a leader shone from an early age, and she wanted to harness her skills and talents to make an impact.

She comments, “I am an electrical engineer by trade. However, I have always been an entrepreneur and foodie. I remember founding the first physics class at my community college during my time as a high school and college student simultaneously through the dual enrollment program offered by my local college. My parents were also leaders and showcased it daily as entrepreneurs in the entertainment industry.”

Aside from offering pre-made vegan products, Dianna’s Eat UNrestricted also offers a range of popular vegan recipes, and the list keeps growing. Erica’s Vegan Sausage Hamburger Helper is widely acclaimed as one of the heartiest dishes a vegan foodie could want while Chef’s Favorite Vegan Mushroom Melt is, true to its name, one of the go-to recipes professionals turn to during special occasions.

She says that she promised herself that she would start a plant-based food business after graduating. Her dreams came true after long periods of hard work, and Eat UNrestricted came to enrich the American vegan product market.

Dianna says that she became a vegan when veganism trends were not as trendy as today. As someone who has a family history of cancer, she does not want to see anyone else go through the pain of losing a family member because of the lack of local vegan shops. She comments, “I have a family history of cancer, and it has inspired me to make the change to a vegan diet in June 2016. However, plant-based foods were not accessible and popular during that time. I couldn’t help but feel that if plant-based foods were more accessible in my community, I could have potentially saved my father and many more people in a similar situation.”

For more information and/or to support her brand, visit EatUnrestricted.com.