You've Got Diversity All Wrong 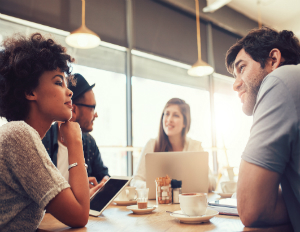 What’s the first thing that you think of when you hear the word ‘diversity’?

It’s more than likely that you share the same opinion as most people in its definition, and it is in that very opinion that there’s the breakdown. The truth is, diversity is more than a pretty word cloaked in hope and aspiration for a “betterâ€ tomorrow. Diversity is only the beginning of seeing the people and their cultures behind the word, and almost everyone gets it wrong.

An example of this is in the release of the movie Hidden Figures, where we see the brilliant talents of black women who come to the forefront in creating the baseline for America’s space missions. The shocking part is, even though they are in the open, there is little that connects the dots to who they really are; they are still behind the scenes. As we follow the storylines of these incredible women, we eventually recognize their contributions and achievements.

A Root Cause: Company Misperception

If you’ve worked in any company, you probably know of management’s attempts to move their idea of ‘diversity’ in the hiring process. While it is a noble cause, they miss the target completely. They bring people of diverse cultures onboard, and yet little is done to increase cultural awareness. In their world, they ‘hire more’ without ‘doing more,’ to understand the people themselves and the rich heritage and experiences that they bring to the table.

Why is there a belief that just having diverse people is enough? What is the disconnect? The heart and soul of diversity is in the people themselves, and everything that involves their history. In many companies, these people feel invisible; their voices never asked for or heard.

Diversity itself has an absolute need to fuse together all of the powerful aspects of the individuals: their backgrounds, experiences, cultures, languages, and personal beliefs. Just having people of varying ethnicities in the workplace isn’t enough. To achieve success you have to have common sense listening and mentoring.

University of Oregon Gladstone describes this perspective perfectly: “It means understanding that each individual is unique, and recognizing our individual differences. These can be along the dimensions of race, ethnicity, gender, sexual orientation, socioeconomic status, age, physical abilities, religious beliefs, political beliefs, or other ideologies.â€ Read that again, it is powerful.

Advantages of ‘Getting It’

For any company that wants this ‘ah-ha’ moment, it becomes a rare opportunity to have meaningful dialogue that embraces complex and personal pain points. This is the time when they can include the topics of race, news, politics, and the many areas that are part of the lives of the minorities at work. They can tap into these fantastic experiences, empowering the culture of their staff to contribute, so that their message brings enrichment. Recognizing the real art of diversity creates an open invitation for ideas and brainstorming. When that happens, unique cultural perspectives can lead to new business opportunities and development.

This attitude tosses aside the mere word and embraces the whole individual. Any company that opens that door can usher in minorities, with the confidence that they can retain and maintain a healthy, inclusive work environment.

But, don’t be fooled. Â This can also be dangerous territory when you realize what “accountant Joe” really thinks about the president or the latest police shooting. Experienced, emotionally intelligent facilitators would need to be on hand to mediate. If not,Â Â the failure to have a real discussion about diversity eventually shows up when it is decided that accountant Joe is no longer a good fit for the company, and you don’t know why.

Instead ofÂ exoticizing diverse hires, bringing attention to how “fewâ€ women there are, or “how manyâ€ African Americans just joined the company–what if diversity was part of the big picture?

The Cause and Effect of Diversity

There is no doubt that businesses have faced challenges in adopting diversity, and they do need help in working through the confusion. However, brands can assist in opening the dialogue by addressing the individual stories, and acknowledging the people behind the curtainÂ andÂ letting them contribute through representing the globally diverse society that we live in. We know that marketing moves attitudes as well as opinions, and companies should not only invite everyone to the party, but also invite them to dance.

Maryann Reid is the Digital Managing Editor of Black Enterprise magazine and author published by St. Martins Press. Her work has been featuredÂ in Glamour, USA Today, Newsweek, CNN.com, and more. Follow her on Twitter @realalphanista.