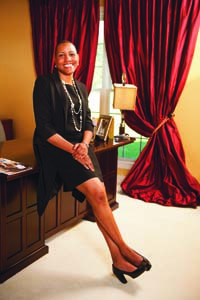 When Zaneilia A. Harris landed her first job out of college as auditor with the federal government in 1993, she earned an annual salary of $25,000–”more money than some of my family members had ever seen.â€ So when relatives asked to borrow money, she felt obligated to help out. “Others had helped me, so I felt I had to give back,â€ she says. She even cosigned on a used car loan for a family member, although the former accounting major and Black Enterprise reader says she knew better.

Inspired as a student by an article she’d read in BE, she wanted to learn about finance so she could better understand how to manage money and eventually pursue a career in finance. But knowing better and doing better are two different things. When the loan went into default, Harris faced a dilemma: either pay the nearly $5,000 bill or tarnish her credit report. For roughly two years she paid nearly $200 a month to fulfill her relative’s obligation. “When you’re just getting out of college, that’s a lot of money,â€ she says.

For Harris, the costly lesson proved invaluable. She says it taught her how to decline constant requests for money. “I share my personal story with my clients,â€ says the now 40-year-old financial adviser and owner of Harris and Harris Wealth Management Group L.L.C. in Upper Marlboro, Maryland.

Countless Americans compromise their financial future because of money mistakes they could have avoided. Some emerge more astute after averting a path to financial disaster, while others find themselves in seemingly bottomless money pits. In today’s unpredictable environment, you can’t afford to sleepwalk while managing your money. For example, in response to financial reform, a number of banks have increased their out-of-network ATM fees, started charging monthly fees for debit card purchases and paper statements, and eliminated free checking. Those costs add up, leaving you with less money for saving and investing. So that you can stay on course, here are five common money mistakes and ways you can steer clear of them or rebound from financial blunders.