5 Success Strategies from the Most Powerful Man in Tech

During our recent Silicon Valley-based TechConneXt Summit 3.0, I gained the rare opportunity to interview the most powerful man in tech for an upcoming episode of Our World with BLACK ENTERPRISE television show: John Wendell Thompson, independent chairman of Microsoft Corp., the $90 billion tech leviathan.

BLACK ENTERPRISE presented Thompson with our Tech Trailblazer of the Year Award at the event for good reason: The Florida A&M and Massachusetts Institute of Technology (MIT) alumnus spent 28 years at IBM, working in such diverse areas as sales, marketing, and software development before rising to the position of general manager of IBM Americas. In 1999, he became the CEO of security software provider Symantec, growing its revenues from $632 million to $6.2 billion and expanding its worldwide workforce to more than 17,500 employees during his tenure. In fact, BLACK ENTERPRISE named him our 2004 Corporate Executive of the Year under the apt banner, “The Best CEO in Silicon Valley.” By 2012, he was appointed to the board of Microsoft. After serving a stint as lead director, he was named chairman when founder Bill Gates stepped down in 2014.

When asked what excited him most about serving as chairman of the tech icon, he says without hesitation: CEO Satya Nadella, favorably comparing his leadership to that of Louis Gerstner, the chief executive who rescued IBM in the 1990s by rebooting its operational and strategic focus and transforming its culture.

With his unparalleled corporate experience, razor-sharp mind, and incomparable management prowess, Thompson offered his take on career advancement during our interview. So you can program your business life for success, I offer some success strategies from Thompson in his own words. And they don’t have a thing to do with being tech proficient.

GO WHERE THE OPPORTUNITIES ARE

I can remember when I was asked to consider a job in Boston in the late ’70s. I called one of the top African Americans at IBM at the time and asked, “Should I take this job?” His answer was, “Absolutely not. It’s the worst place in the world for an African American to work.” I decided, I’m going to do it anyway. Well, it was the best decision that I ever made. I ended up having a guy name Paul Palmer take me under his wing. It was Paul’s coaching, mentorship, and belief in me that got me my first branch office job, which is a second line management position at IBM. He connected me to the chairman of the board, which ultimately led to me getting a year off from IBM to attend MIT Sloan School in which they paid my tuition and salary. After that, my next assignment was to work in the corporate office for the chairman of the board during the transition from one CEO to the next. So, had I listened to my good friend, that African American leader, who said, “Don’t take that job,” Guess what? I probably wouldn’t have the career I have today.

You have to go where the opportunity is and careers are not advanced inside a community. Careers are advanced inside a geographic footprint. And the geographic footprint for IBM, at least the one that I recognized at that time, was US-based. It was not Atlanta-based. So, I left Atlanta and moved to Boston. Most African Americans, even today, want to be in Atlanta. I don’t care about where I live. I care more about what I do.

WEAR THE UNIFORM OF THE TEAM

The first five years of my career I wore what they call two sister suits, poly and ester. I didn’t believe in wool and blue and white shirts and all those things. I just didn’t like it but IBM was willing to put up with me. One day I realized I looked different than everybody else in this room and it didn’t have anything to do with the color of my skin. It had more to do with the color of my suit. My hair wasn’t right. I had a mustache. So I thought if my performance is good and then it comes down to [management] saying, “On the margin, how good is he? Does he fit well with the team?” And I thought, ‘It’s time for me to line up.’ So I went home one night, cut off my afro and mustache and became the new Brooks Brothers model. The next thing I know, my career just took off. It didn’t have anything to do with the clothes. It was my conforming to the culture of the company that became important.

KNOW WHEN IT’S TIME TO LEAVE FOR THE NEXT POSITION

I never envisioned leaving IBM for many, many years. Obviously, 27 years, 9 months and 13 days, I never envisioned it. I woke up one day and realized, “I’m never going to run this place, and I think I have learned enough in all the experiences I’ve had here that I can actually run a company.” Fortunately, I had been on the board of my first public company, a utility company in northwest Indiana, and I had seen how that CEO operated and sat around a table with CEOs of all these other companies. I told myself, “Well, they don’t know any more than I do. I better take my shot.” Knowing that I wasn’t going to get a shot to be the next CEO of IBM, I had to leave. So I left.

The sense I had was the tech community, in general, is a youth-driven culture and environment. If you look at a lot of the companies, the CEOs when they got those jobs they were in their late 30s or early 40s. I knew if I ever had a five as the first digit in my age, my odds of getting one of those jobs were going to be very, very slim. It would diminish quite rapidly from there. So I got the job Symantec at 49, 11 months and a couple of days before my 50th birthday, literally.

When I joined Symantec, it was a consumer packaged goods company. So the idea was if you could package software in a box and put it on a retail shelf for consumers to pull it down, that was Nirvana. One of the principal products in our portfolio, at the time, was Norton Antivirus. In 1999, as the internet was starting to explode, it was going very, very well. But we had all these other products in the portfolio that were profitable but they weren’t really growing all that fast. So the view was, let’s pivot. Let’s make a major shift in this company and focus on security.

My belief about technology companies was that they should be technology centered. Symantec, at the time, was centered around its distribution model, not the technology it was building. So that pivot was Norton is our core and let’s add as many security capabilities as we can around that. So we sold off our Java tools business and a lot of products that really weren’t relevant. And then we built the company through both organic and inorganic growth to the point where revenues got to a little over $6 billion, I said, “OK, 10 years, I’m done.”

I have a personal philosophy about leaders. I think leaders get stale after about seven to nine years. So when my 10-year period was up, I was ready to move because I did not want to be the stale guy sitting in the chair while the company was trying to prosper.

CONSIDER YOURSELF AS THE BEST BOARD PROSPECT

I joined my first board in 1993. It was kind of a back-door board invite in which the CEO of a company came to me and said, “Can IBM give me some candidates to consider for our board because we want a tech person?” So, I went to the HR team at IBM and said, “Can you give me some candidates to share with my customer?” and they gave me three. I went back to the client and said, “Here are the three candidates.” He looked at me and said, “You stupid guy. I want you. I don’t want any of them.” I was like, “Me on a board?” I had never even thought about it.

I went back to IBM and asked, “Is it OK for me to join this board?” And they said, “Sure.” So I joined the NiSource board and shortly thereafter I joined the Future Brands board…and on and on. I’ve had lots of board experience and I think that’s what boards are now looking for. Who has the background and experience and would be complementary to the other members around the table? Fortunately, we’re building a stronger African American base of leaders and those leaders eventually will have a shot because I know many, many companies are looking to diversify their boards. 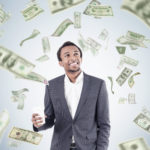 7 Ways to Fund Your Startup