New reports reveal that 71 publicly traded companies received funding from the Paycheck Protection Program (PPP), which was designed to keep small businesses afloat during the coronavirus outbreak through a $349 billion emergency fund.

The program offered loans of up to $10 million with a 1% interest rate to businesses with fewer than 500 employees. The program also forgives the principal if the funds are mostly used for payroll, mortgage interest, rent, and utilities. The PPP is part of the $2 trillion coronavirus relief package, passed in March.

According to Forbes, 71 publicly traded companies received $300 million of emergency loans, representing 0.09% of the financing that was distributed by the Small Business Administration. Twenty of those companies have a market capitalization greater than $100 million, even after this year’s stock market drop and volatility due to the coronavirus.

Several companies receiving PPP funding are based outside of the U.S. Biotechnology company Wave Life Sciences, based in Singapore received a $7.2 million loan. The company has a market valuation of $286 million and has extensive operations in the U.S.

CRH Medical, a medical services provider, based in Canada received a $2.9 million loan and has a market capitalization of $148 million. DMC Global, a company in the oil industry, was the second-most-valuable publicly-traded company to receive PPP funding. It received a $6.7 million loan.

The most highly valued company to received funding was Shake Shack. The burger chain has a recent stock market capitalization of $1.6 billion. Shake Shack has more than 7,000 employees nationwide but was able to receive funding because none of its locations had more than 500 employees. The chain received a $10 million loan but returned the loan after receiving significant backlash.

Senate Democrats are currently working on a bill to inject $370 billion into the PPP, allocating $60 billion of that sum for rural and minority groups. A vote on the second round of money could come as soon as Wednesday. 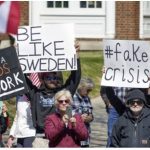