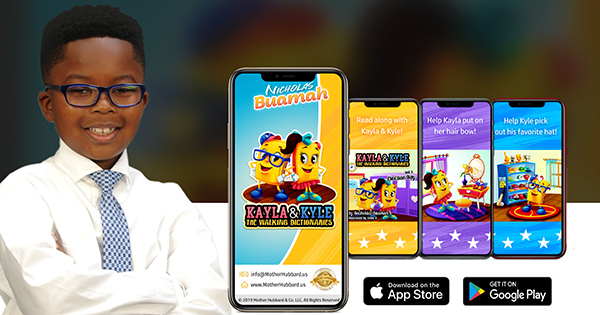 Eight-year-old Nicholas Buamah has accomplished so many great things at an early age. In April, the Georgia native celebrated his book Kayla & Kyle The Walking Dictionaries: Election Day being added to the Library of Congress catalog after its December 2018 release. Months later, the author launched an app to assist young children who read his popular book series.

Available on Android and iOS devices, Kayla & Kyle is an augmented reality app that gives users the option of reading his books aloud and having the illustrations from his series come to life.

Kayla & Kyle: The Walking Dictionaries is an animated book series that helps elementary-aged school children build their vocabularies. Buamah’s mother, Danielle, revealed that the series was largely inspired by her journey toward building Nicholas’ vocabulary.

“I developed the character of Kayla when Nicholas was younger to help teach him expanded vocabulary,” she said in a statement. “After being praised by his first-grade teacher for using the word ‘collaborate’ during his first week of school, I asked Nicholas what he thought about writing a book to help his friends expand their vocabularies. He thought it was a great idea, as long as one of the main characters could be a male figure, and that’s when he created Kyle.”

Along with launching a new app, Nicholas founded a nonprofit called Books Without Borders– GHANA’, where he will be donating books to be delivered in schools in libraries throughout Ghana. He is slated to visit Ghana in May 2020.

Nicholas has appeared on the Steve Harvey Show, Good Day Philadelphia, and was honored by The View co-host Whoopi Goldberg.

As he continues to grow, Nicholas hopes to have his books sold in multinational retailers like Walmart and Target, BlackBusiness.com reports. He would also like to bring his characters to life in an animated cartoon series.