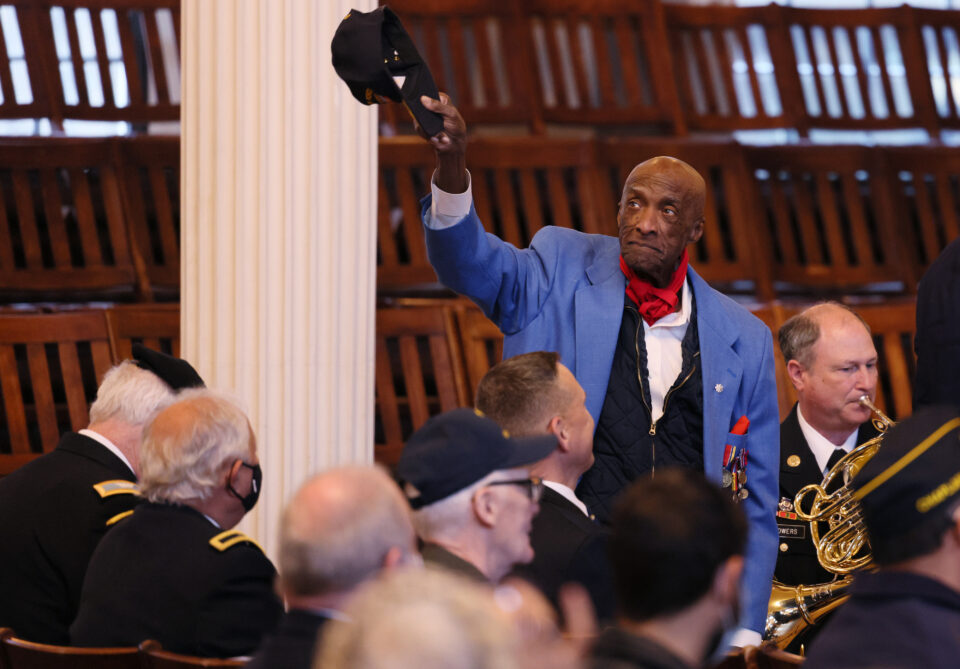 Boston, MA - November 11: Lt. Col Enoch Woody Woodhouse Jr. (R) a member of the Tuskegee Airmen who fought in World War II stands and salutes the crowd as the Musical Salute to Service by the 215th Army Band of the Massachusetts National Guard is played at the annual Veterans Day Observance at Faneuil Hall in Boston on Nov. 11, 2021. (Photo by Jessica Rinaldi/The Boston Globe via Getty Images)

The triumphant story of one of the last members of the all-Black World War II fighter pilot unit is now immortalized in two murals at Logan International Airport in Boston.

Retired Lt. Col. Enoch “Woody” Woodhouse II, a legend among the renown Tuskegee Airmen, proudly hails from the Roxbury neighborhood of Boston. Following the attack on Pearl Harbor, Woodhouse enlisted in the army. He trained with the brave young men who proudly served as America’s first Black military airmen, all while fighting prevailing racism.

Lt. Col. Enoch “Woody” Woodhouse, one of the last Tuskegee Airmen, at the American Heritage Museum in Hudson tonight. pic.twitter.com/f17uV1vlH5

Woodhouse’s hometown is now honoring him in a big way, and it all took place during a special unveiling ceremony on Monday, NBC Boston reported. Located in the arrivals area of Terminal C, near the USO facility, Woodhouse stood by and received his flowers with honor.

“They say ‘Woody, where are you from?’ I say I’m from Roxbury, they say ‘no, I thought you were from Boston.’ I say ‘yeah, but when I think of Boston, I think of Beacon Hill, I think of Louisburg Square, I think of Commonwealth Avenue, not the ghetto in Roxbury,” explained Woodhouse, per CBS Boston.

Along with a stunning wall of honor, the man of many medals is now a 95-year-old brigadier general of the militia of the Commonwealth, thanks to Governor Charlie Baker of the Commonwealth of Massachusetts, NBC Boston reported. He is also the 2006 recipient of the Congressional Medal alongside the other surviving Tuskegee Airmen.

“Woody’s one of those people who managed to climb above the rancor and prejudice and the indignity … because, honestly, he was just bigger than that,” Gov. Charlie Baker said, per the outlet.

The Tuskegee Airmen were in constant demand for escorting bombers during World War II. They were famed for garnering records unmatched by any other fighter group, including having one of the lowest loss records.

Woodhouse, who earned a law degree from Boston University in 1955, went on to pursue law successfully after dedicating his service to the military. He also spent time worshipping at Trinity Church in Copley Square, a passion he served in addition to uplifting Boston youth. For that, he was recently presented with the Living Legend Award by the Boston Red Sox and the Boston Area Church League.