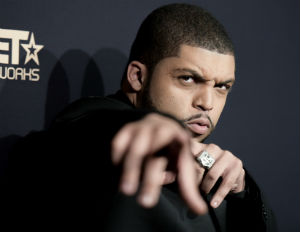 Last night on BET and Centric, America got a chance to experience black star magic with the ABFF Awards: A Celebration of Hollywood, brought to you by ABFF and BET.

The ABFF Awards was an exceptional evening of recognition, appreciation, laughter and camaraderie as actors and entertainers paid homage to those who paved roads leading to Hollywood before them, and those who carried torches of African American artistry, lighting their way.

Jamie Foxx kicked off the award presentations by honoring film producer Will Packer with the ABFF Alumni Award. “You are looking at somebody that had that opportunity. All I needed was a chance,” said Packer upon receiving his honor. “I am a product of an institution that said, ‘You are enough,’ that said, ‘What you’re doing is important,'” he continued, speaking of opportunities afforded to him by ABFF.

The award presentations continued as Taye Diggs presented the Award for Excellence in the Arts to Regina King, which was hilariously intercepted by Regina Hall. Hall then went on to present the Television Show of the Year Award to the much deserving cast of Blackish, which was succeeded by a sultry performance by striking vocalist Bozeman.

The power move-making director of Creed, Ryan Coogler, was lauded throughout the evening for his continued accomplishments in film, and he received the Rising Star Award, presented by actress Octavia Spencer.

One of the evening’s highlights was a moving tribute to the 2016 Legacy Award Winner, the iconic and incomparable Diahann Carroll, which was presented by Kerry Washington and Keke Palmer.

The most coveted award of the evening, Film of the Year, was presented by funnyman Anthony Anderson to none other than Straight Outta Compton.

The evening concluded with a special performance by Morris Day & The Time.

The ABFF Awards was a long overdue recognition and tribute to black television and cinema, and the celebration will continue June 15-19, 2016 in Miami Beach, Florida, at the 2016 American Black Film Festival. Register now!