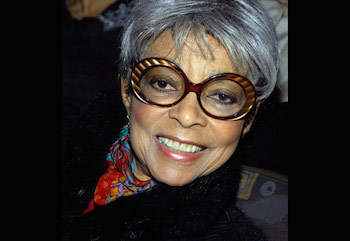 Stage and screen legend Ruby Dee passed away Wednesday (June 11) at the age of 91. Her death was confirmed today (June 12) by a family member, who declined to answer any questions pending the release of a statement. Dee was surrounded by family and close friends in her home in New Rochelle, New York.

The Emmy, Grammy, and Screen Actors Guild award winner stood up for African-Americans and their civil rights. Best known for her starring role in “A Raisin in the Sun” (1960), Dee championed grace, intelligence, and savvy as a pioneering African American woman in Hollywood. Alongside her late husband, Ossie Davis, the duo starred in Spike Lee movies including “Do the Right Thing and Jungle Fever.”

Dee was also the recipient of the Black Enterprise Women of Power Legacy Award, the highest honor for women achievers.

When Ossie died in February of that same year, his wife carried on the legacy and continued to perform and inspire others through speaking engagements.

A Cleveland, Ohio native, Dee had her first film role in 1949, in the musical drama “That Man of Mine.” The following year, she played Rachel Robinson in “The Jackie Robinson Story,” and co-starred opposite Nat King Cole, Eartha Kitt, and Cab Calloway in “St. Louis Blues” (1958).

We here at Black Enterprise offer our sincerest condolences to the family and close friends of the late Ruby Dee.