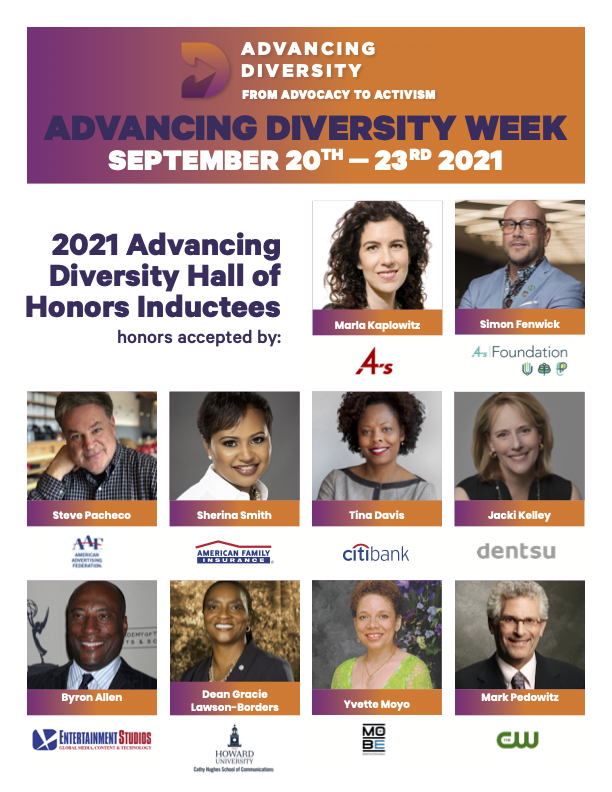 For the first time ever, the “Advancing Diversity Week” conference will occur Sept. 20-23 this year.
The four-day virtual conference will include over 80 leaders from the media, advertising, and entertainment community tackling topics ranging from advancing diverse talent retention to recruiting young minorities — including Black Americans — into the industry. They will conduct provocative conversations on advocacy, activism, equity, and belonging during an inaugural series of events.
The event, called “From Inclusion to Belonging,” is being hosted by MediaVillage.com  and  AdvancingDiversity.org. It will consist of an HBCU Virtual Tour Bus, a GenZ Community Town Hall Assembly, panel discussions, and a job fair for professionals and students.

The seven-figure function will be sponsored by many high-profile backers, including Disney Ad Sales, the CW Network, Twitter, ViacomCBS, Warner Media, the NBA, and the USA Today Network.

Panelists will discuss the power of belonging and convey how it is integral to meaningful transformation. Another topic will be recreating workplace culture in post-pandemic world across in the media and advertising business.

“This is a pivotal moment in the history of our industry,” stated Philip McKenzie,  Executive Director for AdvancingDiversity.org. “We are ushering in a new spirit of belonging. The media and advertising industry is on a transformational journey to advance diversity from advocacy to activism and we are pleased to be leading the community on this vital voyage.”
Plus, MediaVillage will announce its 2021 Advancing Diversity Hall of Honor Inductees. They are:

“The inductee companies were chosen for their dedication to advancing diversity from advocacy to activism,” said Jack Myers, founder of MediaVillage and AdvancingDiversity.org. “We’re especially pleased to announce partnerships with Howard University and HBCUs, the Institute for Veterans and Military Families, Female Quotient (FQ), American Advertising Federation (AAF), 4A’s Foundation and the ANA’s American Educational Foundation (AEF), among other diverse groups.”

To register and for more details about the conference, visit here.