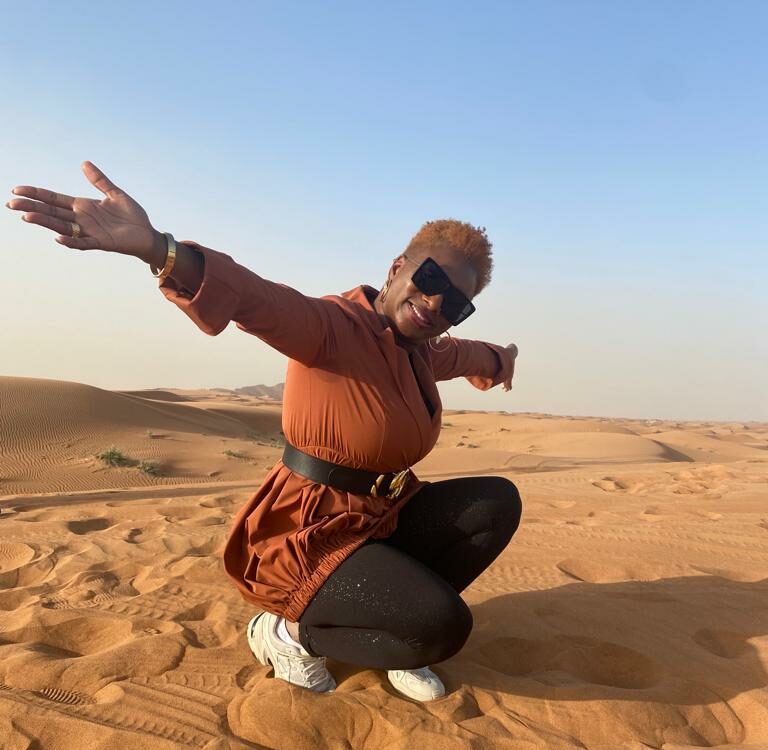 Hundreds of people from around the world flocked to Dubai early last month for the Afrozons Dubai Soundoff, a premier travel experience powered by the Board of Dubai Tourism and Afrozons. The one-of-a-kind voyage included tours of Dubai, a welcome reception, a desert safari party, access to the World Expo 2020, and a concert featuring legendary Nigerian Afrobeat artist D’Banj.

Afrozons founder Sheila Okonji-Ashinze, a British-Nigerian media personality affectionately known as “Sheila O.,” says she partnered with the Dubai Tourism Board to curate a trip that would provide Afrobeat lovers across the globe with a first-class taste of Dubai without the typical cost.

“We were able to pull off over 500 people coming out to Dubai with us and having a great time,” she told BLACK ENTERPRISE.

The Afrozons Dubai Soundoff comes five years after Sheila O. launched the Afrozons radio show on Power 92.3 Chicago in 2017, becoming the first international female personality to host an Afrobeats show on a major U.S. FM station. The show, which is now nationally syndicated on SiriusXM HURVoices Channel 141 in addition to other markets, was created as a platform to help connect Black people around the diaspora. In a statement, RCA Records’ co-head of promotion Sam Selolwane praised Afrozons for bringing Afrobeats to the U.S.

“Afrozons has been ahead of the curve introducing Afrobeats to this side of the world for quite some time,” she said. “Sheila’s dedication to the artists and genre has helped catapult these artists and helped turn them into the household names we know today.”

The Soundoff is not only an extension of the Afrozons brand, but it also served as a new vehicle to unite people of African descent around the sound of the motherland.

“Fusing everyone together was just mind-blowing,” said Sheila O., noting that attendees traveled from Africa, the United States, the Middle East, and Europe. “All of us just meeting together in Dubai to have a good time with one agenda in mind—which is to bridge that gap—that was, for me, the highlight of it all.”

“I’m so delighted that I’m part of this journey representing Zambia, of course, and also representing Kwithu FM  93.3,” said Chichi Daisy Lups, a Zambian media personality, actress, and radio host. “This interaction is bridging the gap between the United States and the diaspora and Africa,” she continued. “Afrobeats has really just broken the barriers.”

“My favorite part was the sand dunes and the camel ride,” he told BE.  Beyond the exciting adventures, Hammond also enjoyed meeting different people and touring Dubai. “The architecture—I really was amazed by that,” said Hammond. “That’s what caught my attention.”

Issam Kazim, the Dubai Corporation for Tourism and Commerce Marketing CEO, gladly welcomed the global Afrobeat community to the “City of Gold.”

“It’s a proud moment to have Afrozons here in Dubai, celebrating here with us in a city that [has] over 200 different nationalities that call Dubai home,” he told BE.

Tolu Oniru, a Nigerian radio and talk show host popularly known as Toolz, was thrilled to participate as a presenter at the Afrozons Dubai Soundoff.

“One of the things I love doing most is traveling. You create so many amazing memories,” she said. “I think Black people need to travel more, and particularly African American people need to leave the States and the Caribbean and just go to different parts of the world.”

Kenyan media personality Mwalimu Rachel agreed, encouraging “Black people around the diaspora to travel [and] travel to luxurious places. [We need to] normalize luxury, but in this case, affordable luxury,” she said.

Rachel, the head presenter at NRG Radio, also urged Kenyans to prioritize traveling abroad. “Back at home, if we are to take vacations, for instance, it’s very short vacations like one, two, [or] three days, and we just go to the coastal area of our country,” she said. “[We] don’t plan well for bigger, more luxurious vacations because we’re always thinking about the money, like ‘oh my God. It’s going to cost me so much.’”

However, Rachel stressed the benefits of taking a break from daily routines to expand your horizons and give your mind and body the opportunity to rest and recharge. “I think we’re overworked, and we forget about the importance of travel.”

Media and radio veteran Sheila Eldridge, the CEO of Miles Ahead Entertainment and Broadcasting and the founder of the Mocha Podcast Network, applauded Sheila O. for bringing people around the world to Dubai.

“That’s the first time that [media] personalities from around the globe and, of course, the diaspora of Africa have come together for something like that to celebrate the music, and to celebrate the art form, and to just network,” she said. “The fact that Afrozons was a platform that did that [and] brought it together is pretty amazing.”

During an emotional speech at the desert safari party, Sheila O. described working with the Dubai Tourism Board to bring Black travelers together as a huge milestone in her career. “I’m a girl born in Lagos, Nigeria. I grew up in London. Yes, I live in Chicago, but Dubai is a dream come true.”

However, more than that, Elderidge says the Afrozons Dubai Soundoff marks a new phase in the Afrobeat movement.

“Sheila is a pioneer,” she said. “She understands and sees how important that connection is for us globally, and for us as a people.”