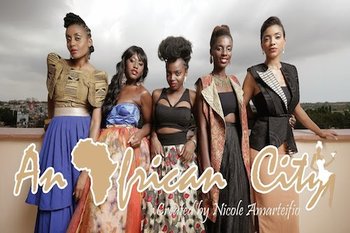 As one of the main characters in the cast, Esosa, how did you develop your role as Ngozi? How did those elements best represent who you are in real life?

Esosa E: I had to find the core truth about Ngozi that resonated for me personally, and imagine all facets of her life that weren’t in the script. I have to shout out my amazing acting coach Marishka Phillips for her support during that process. Ngozi has a very innocent way of seeing the world and although she is educated, she’s extremely naive about sexuality because she is a virgin. Ngozi has a desperate desire to be liked and to fit in, so she struggles with trying to retain her identity as a Christian amongst her secular friends. I really didn’t see myself as her initially, but I had strong reference points for friends and family that were on the journey of celibacy until marriage or had an Ngozi quality about them. I used those people as inspirations and then chose to make some slight external adjustments, specifically with my voice, until I really felt at home moving through the world as her.

While having a lunch meeting with Nicole she had the brilliant idea to make Ngozi a vegetarian. Personally, I’ve been vegan for over ten years, and outside of acting I run a health blog called Raw Girl in a Toxic World, which focuses on vegan lifestyle and holistic health. I was also raised Christian, but I’m a little bit more of a hippie than Ngozi because I combine my Christian faith with yoga and daily meditation and that’s how I stay grounded. The best elements of Ngozi that are also a big part of me are her commitment to health, to love, and the love of God. 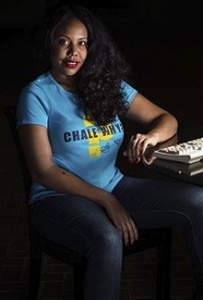 Together as a collective, An African City has started a wave of attention that is purely contagious. Has the same fervor developed back in Accra, Ghana? How do you all believe the native audience has taken to the cast and the concept of the web series?

NA: There are Ghanaian women who now come up to me in restaurants or social gatherings and thank me for putting women on screen who look and sound like them. For so long, there has only been one type of African woman on screen, this was something different.

MM: I agree! Ghanaians are excited to see the unique faces in our cast. With African programs, although the talent exists on the continent, filmmakers tend to overuse the same people as their main characters. The most frequent response I have heard in regards to An African City is the fact that it is exciting to see fresh faces talking about topics that are relatable and real and not typically spoken about in African film!

EE: I have seen, especially on Twitter, tons of positive comments from Ghana. People are saying that they are so grateful for a high quality African production. They wish it was on actual television, and they love the fashion showcased within the show. The only funny things I noticed were the comments about how all of us “Americansâ€ were pronouncing some of the African names wrong because we speak with our U.S. accents. This is true, but it’s also how our characters would speak because we are African, but did not grow up on the continent or have been abroad for many years.

After episode one, some people voiced that they felt the show wasn’t representative of all African women. This is also true. But, what show can be? What show can be representative of all African women? I think that when someone breaks new ground, everyone desperately wants the story to speak to everything they know and hold dear. Our story is one about the returnee. I hope that rather than get upset about what An African City doesn’t include that people are inspired to get their own work out there. The world needs more of our stories in it, period.

On the next page, the gang talk about making Ghana an entertainment hub and “The Belly Button Test”…