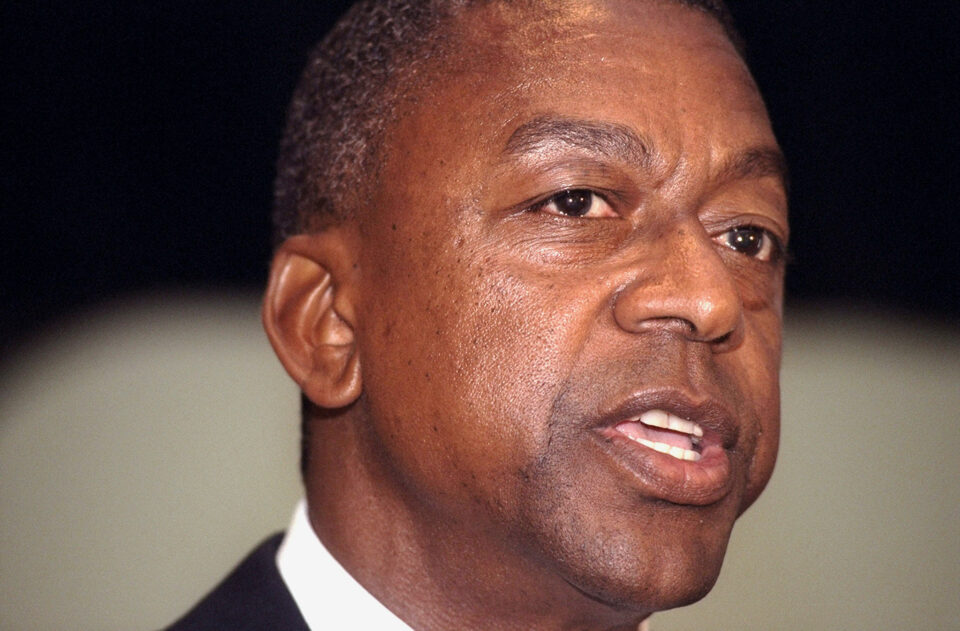 UNITED STATES - AUGUST 12: Bob Johnson, of BET Holdings, Inc., at news conference at the Plaza Hotel to announce partnership with Microsoft, Liberty Digital, News Corporation, and USA Networks in a venture that will create the leading online destination for blacks. (Photo by Budd Williams/NY Daily News Archive via Getty Images)

Retirement Clearinghouse L.L.C. (RCH), among the firms owned by RLJ Cos., is uniting with three of the nation’s largest 401 (k) record keepers to save $619 billion in retirement income for Black American workers over a generation. Fidelity, Vanguard, Alight Solutions, and RCH are setting up a consortium called Portability Services Network (PSN). It aims to accelerate the nationwide adoption of auto portability to help America’s underserved and under-saved workers enhance their finances in their golden years.

The endeavor is groundbreaking, as Johnson told BLACK ENTERPRISE in an interview. It is the first time ever—that he’s aware of—that a Black company and white companies have combined for the sole purpose of improving financial security and aimed to prevent individuals from cashing out of 401(k) accounts early.

“This is truly a historic moment for the industry, as well as our country, and is the first step to reduce the wealth gap between Black and white households in this country,” Johnson stated.

The consortium now represents about 43.8 million workers covering over 48,000 employer-sponsored retirement plans, based on data published by Pensions & Investments, based on a news release. PSN, which Johnson says will start in the first quarter of 2023, will use RCH’s auto portability solution to build a nationwide digital hub connecting workplace retirement plan recordkeepers and the plan sponsors they serve.

PSN will be a clearinghouse for automatically locating a participant’s active workplace retirement account in their current employer’s plan and transferring the same participant’s account from their prior employer’s plan into their active account. That means 401(k) holders can keep their accounts no matter how many times they change jobs.

The plan makes it simpler for American workers to shift 401(k) assets from one employer plan to another, lowering premature cash-outs and preserving retirement savings. Auto portability protects retirement savings for employees most vulnerable to cashing out, a setback for many Black Americans. Johnson noted they cash out at about 63% versus 30% to 40% of white Americans.

For 401(K) employees with balances of $5,000 or less, with the largest pool being Black Americans withdrawing money, the consortium will focus on helping them grow balances. Auto portability allows 401(K) account users to know where their account is because it travels with them.

The founder and chairman of The RLJ Cos. and majority owner of RCH, Johnson has been a longtime top advocate of closing the wealth gap. He relies on auto portability to help accomplish that. In fact, Johnson has been focused on finding business solutions for social problems. And now, with the launch of PSN, he cites the business startup as one of his greatest achievements.

Cashing out has traditionally been viewed as an easier option than the current manual, often cumbersome and time-consuming process of transferring from plan to plan. Plus, cash-out rates for job-changing minorities, low-income workers, and women are typically higher than average. RCH developed its auto portability model with the private and public sectors to reverse the trend.

If auto portability were broadly adopted, over the course of a 40- year period, an extra $1.5 trillion in savings would be preserved in the U.S. retirement system, per the Employee Benefit Research Institute (EBRI).

The nonprofit calculates about $92 billion in savings leaves the U.S. retirement system annually because Americans who switch jobs prematurely cash out their 401(k) savings accounts and pay taxes and penalties. RCH estimates the new plan will serve 67 million Black and minority workers.

PSN will be 51% owned by RCH, with Johnson serving as PSN’s chairman. He says plans call for PSN to operate the network at the lowest cost possible to participating workers. He added that PSN would like three other companies to join as board members and owners. He says Fidelity, Vanguard, and Alight now represent about 40% of the U.S. workforce of companies that have employees with 401(K) plans. But that also means there is potentially about 60% of the industry to still tap into.

Johnson explained scaling the network by adding as many record keepers as possible is important as it would benefit users. “Our goal is to act like a utility and provide the lowest cost possible.”