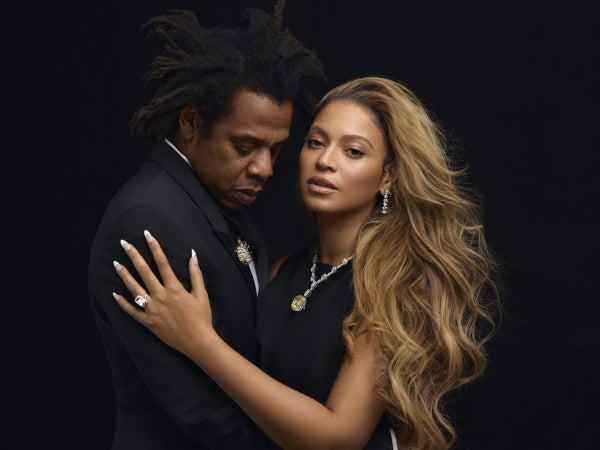 The Carters teased their more sentimental moments in their “About Love” commercial for Tiffany’s. The short film included a never-before-seen painting from the late Jean Michele Basquiat and an exclusive Tiffany yellow diamond that only four women have previously worn.

Directed by Beyoncé’s Black is King filmmaker Emmanuel Adjei, the visuals show a side of the superstar couple that they haven’t shared publicly. Queen Bey was dripped in Tiffany diamonds for the shoot while playing the piano and serenading her rap mogul husband with the classic Breakfast at Tiffany’s song “Moon River.”

Jay-Z appeared awestruck by his wife’s beauty while typing away on his typewriter and watching Bey’s beauty plastered across the wall through a projector. The campaign was shot at the Orum Residence in Los Angeles and was personally selected by the couple, Essence reports.

Special behind-the-scenes shared by Tiffany shows Jay-Z joking with his wife about getting engaged again.

“I want an engagement ring,” Jay-Z says while looking over the Tiffany ring he had on. “You want to engage me?”

“I will engage you,” Beyoncé tells her husband.

Jay-Z sports the Bird on a Rock brooch as cufflinks while Beyoncé wears the Tiffany Diamond. She made history as the first Black woman to wear the giant diamond. But it didn’t come without its fair share of public scrutiny.

The “Brown Skin Girl” singer was reportedly “disappointed and angry” with the criticism she received for wearing the diamond. She reportedly had no clue about the diamond’s problematic history and likely wore it after being paid extremely well and as a nod toward the resilience of Black women.

“Beyoncé is aware of the criticism and is disappointed and angry that she wasn’t made aware of questions about its history,” a source told The Sun last month.

“She thought that every final detail had been vetted, but now she realizes that the diamond itself was overlooked.”

Well, Tiffany & Co. has Beyoncé and that blood diamond on full display for all to see. At least the campaign came out nice, scarred history and all.