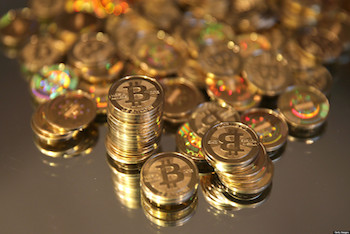 For those who haven’t been keeping up with Bitcoin, here’s some information to bring you up to speed.

Since its inception, Bitcoin has quickly become the leader in developing a payment system that utilizes open-source software. Created by Satoshi Nakamoto in 2009, payments in the system are recorded in a public ledger using its own unit of account, which is also called bitcoin. Payments work peer-to-peer without a central repository or single administrator, which has led others to call Bitcoin a decentralized virtual currency. With users able to transfer funds at the click of a button, Bitcoin is moving from its Deceptive phase to a very, very, very Disruptive one.

At present, one bitcoin is equivalent to about $600 USD, according to Forbes. The unit is divisible down to eight decimal places, or 0.00000001 BTC. The digital currency can be used to purchase, sell, and exchange for items or other currencies. You can also “mine” it, but for now the focus is on its shift within monetary culture.

If you can remember life before such things as the Internet or even email, Bitcoin is on a path to eliminate the need for banks, credit card and currency exchange fees, and reduces the need for lawyers in transitions–which should make the world a happier place.

Bitcoin, according to Forbes, is following the 6Ds and is on a path to go from Deceptive to Disruptive over the next one to three years. For the full details, please check out the piece by clicking here.