Black Company Aims To Offer Mobile Banking Services To 100,000 People By Next Year 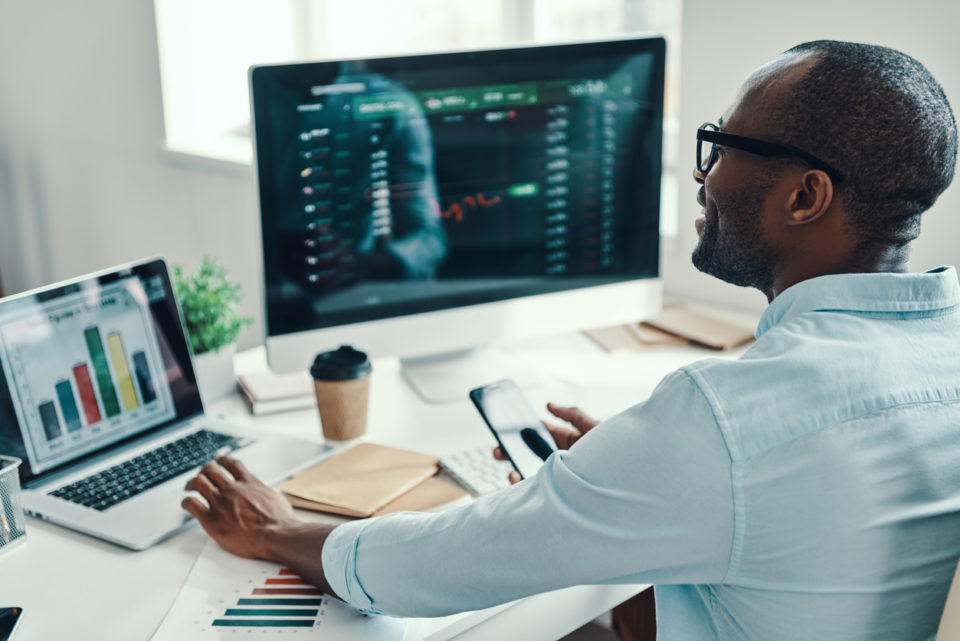 man in shirt using computer and smiling while working in the office [Image: istockphoto.com]

After helping raise a fresh $12 million round of financing, Wole Coaxum is equipped to grow his business to offer mobile banking services more vigorously to scores of Black Americans.

MoCaFi aims to achieve that by offering a debit Mastercard, mobile check deposits, free bill pay, and other services. Coaxum says the services are needed as African Americans and Hispanics spend 50% to 100% more on monthly basic banking services than other racial groups, costing them $40,000 in excess fees over a lifetime.

The MoCaFi expansion comes as the firm’s founder and CEO Coaxum is developing concepts to battle an ongoing problem of people of color often not getting vital banking services. They are among people that often rely on non-traditional or alternative financial services, including costly check cashiers, pawnshops, and payday lenders to tend to their finances.

“We want to disrupt that $196 billion industry,” Coaxum says. “If we’re able to get people on our platform and encourage them to use our services, they now can have a safe place to keep their money, make it easier to put cash into their accounts and participate in the digital economy.”

Simultaneously, the police shootings last year of multiple African Americans including George Floyd, along with legions of Black businesses being forced to close or nearly shut down due to the pandemic, is fueling the need for new options. Reports show the number of Black businesses dropped by 41% from February to April 2020. Contrarily, the number of white business owners dipped by 17%.

Hoping to help curtail the discrepancy, MoCaFi in March reported it raised $12 million in Series A round financing, including $2 million from credit card and technology payment giant Mastercard. Of the remaining $10 million, about half came from new investors, including an undisclosed amount from Citi. The other half is from existing investors. The funding will allow MoCaFi to expand into several major cities in the upcoming months by providing financial products to people of color.

Coaxum told BLACK ENTERPRISE that the money will be used to operate at scale. He says that means making investments in all areas of the business, including hiring more salespeople, investing in technology to enhance its platform, and boosting marketing efforts.

With that, Coaxum has large growth goals. The former Wall Street executive with a seasoned financial services background wants to see 100,000 people on MoCaFi’s platform a year from now. That would be a significant increase from 25,000 customers the Black-owned company has currently.

“That’s why we’re partnering with all of these cities, and we have our own consumer direct marketing strategy,” Coaxum says, reflecting on where the customer gain will largely come from.

All told capital-wise, MoCaFi has raised $19 million in three rounds of financing with contributions coming from the likes of investment banks and friends and family since Coaxum started the firm based in Harlem, New York, and Newark, New Jersey in 2016.

After serving as a managing director from 2006 to 2015 at JPMorgan Chase in digital sales, Coaxum was compelled to start MoCaFi after unarmed Black teenager Michael Brown was fatally shot in 2014 by a white police officer in Ferguson, Missouri. Coaxum says that injustice was the impetus to use his time, talent, and resources to help solve the nation’s racial wealth gap. “I would rather have the legacy of trying to fulfill that than retiring with a gold watch from JPMorgan.”

A Cleveland native, Coaxum grew up in a family with a strong background tied to civil rights. Plus, his entrepreneurial great grandfather helped create small businesses for Black folks and helped get them into homes in Charleston, West Virginia. Both also influenced Coaxum to become an entrepreneur.

Now, he is using MoCaFi to target over 50 million unbanked and underbanked people, mostly Black Americans nationwide. There is a demand for the services as nearly 14% of Black households were unbanked in 2019, more than five times higher than white households at 2.5%, FDIC data shows.

So how does MoCaFi make money serving that market? Coaxum says his firm collects interchange fees from customers using debit cards. Coaxum added MoCaFi is considering making loans directly to consumers when it sees a gap in the market, creating potentially more revenue.

Coaxum says MoCaFi had $1 million in revenue in 2020 and hopes to do more than that in 2021. He projects the gain will come from the firm’s different customer acquisition strategies. Over time, Coaxum says MoCaFi aims to help people get into homes, start small businesses, grow, and save more money.

He says a key is how much in repeat customers and repeat business the platform brings in. In five years, he wants MoCaFi to achieve revenues like rival mobile banks Chime and Varo. “That is the goal we’re going after as we think about building our company.”

A strong pillar for MoCaFi’s growth is Mastercard. Coaxum says Mastercard has been a partner of MoCaFi since it started. Mastercard does not have a seat on MoCaFi’s board, but Coaxum says Mastercard helps his firm in so many ways. For instance, MoCaFi works directly with Mastercard in marketing, sales, product, and data analysis to gauge strategies to reach different population segments. The accord helps both companies find ways to sell to communities of color. “I like to joke that Mastercard’s logo is tattooed on all four of our cheeks at MoCaFi.”

Mike Froman, vice chairman and president, Strategic Growth for Mastercard, reflected on his firm’s work with MoCaFi in an email interview with Black Enterprise.

“We need to be deliberate about opening doors and bringing down barriers to help close the racial wealth and opportunity gap, not solving for one issue but rebuilding a system where everyone can reach their potential. That is why our work with startups like MoCaFi is not just about funding. Yes, we have invested, but we are also piloting products together, providing consulting services, and through our trusted relationships with local City leaders, we have been able to support MoCaFi’s expansion into programs in Los Angeles, New Orleans, and elsewhere.”

He added, “We united with Wole Coaxum in a common goal to bring to market low-cost alternative financial services to Black communities across America. MoCaFi has a direct connection into those communities most in need of support and we recognize that by bringing all our resources to bear we can help MoCaFi to scale and ensure our innovation pipeline is meeting the needs of their customers.”

Coaxum says his firm has benefited from Master Your Card, an effort that helps small businesses and others gain a greater understanding of digital banking services and how electronic payment technology works. The program jells with MoCaFi’s mission and business model that addresses limited economic mobility and lack of financial equity in Black and Hispanic communities nationwide.

In 2020, MoCaFi engaged in the Mastercard Start Path startup program. The effort has allowed MoCaFi to scale its platform to offer demand deposit accounts along with disbursement accounts for disaster-related and other payments. MoCaFi works with credit-reporting giants Equifax and TransUnion to permit customers to improve their overall financial literacy and boost their credit file with rent payments and other recurring bills processed on its platform.

Three years ago, MoCaFi teamed with Mastercard to develop the Mastercard City Key program to embed in some municipalities’ ID cards. The product allows people without a basic debit card to use the card instead to open a mobile bank account and access city services.

As such, MoCaFi now is using its platform to form fresh partnerships with cities and organizations across America. It teamed with the City and County of Honolulu last December to aid almost 4,000 households hurt economically by COVID. MoCaFi is working with the YWCA of Metropolitan Chicago to erase racism and financially empower women. Coaxum says MoCaFi is looking to expand that as its flagship way of reaching the entire city of Chicago.

Plans call for MoCaFi to launch such services in Newark, New Jersey, and Columbia, South Carolina, this year. Coaxum added MoCaFi is in Atlanta but wants a broader Georgia presence and hopes to expand into other states in 2021 in the Southeast region.

Helping entrepreneurs is another key part of MoCaFi’s growth plans. Coaxum says MoCaFi wants to create and roll out by year’s end a small business offering targeting Black businesses. That effort could include helping entrepreneurs set up business models and better collect money from customers digitally.

He says MoCaFi is working to encourage people to shop local and support Black businesses. Next up, MoCaFi will partner with the city of Los Angeles and Ignite Cities to offer the Angeleno Connect account. The account is geared to provide a quality, digital bank product for populations unbanked or residing in banking deserts in the Greater Los Angeles area.

Interestingly, Coaxum says the pandemic has accelerated what MoCaFi is trying to do. He says the crisis highlighted the need for some of the most vulnerable people—including individuals and small business owners—to gain access to more efficient banking services and get relief during a difficult time.

Further, MoCaFi is working with federal, state, and local legislators to discuss ways its platform can assist them to connect with hard-to-reach communities.

On the rival front, observers say Walmart, Amazon, and other tech startups are pursuing the same market MoCafi is. But MoCaFi officials claim the company’s niche is targeting Black and Brown communities that are disenfranchised and not being served by larger competitors.

“This requires offering new ways of thinking and innovation to address a market failure,” Coaxum says.  “These are fundamental issues that need to be addressed, and we think that we got  a low-cost, high-quality way to do it at scale.”