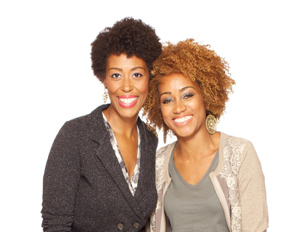 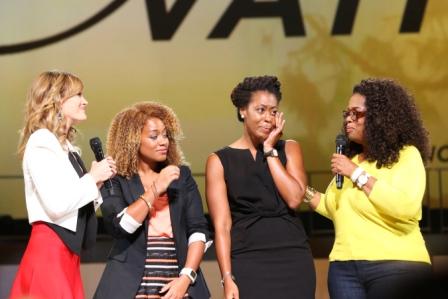 Black Girls Run! founders Ashely Hicks and Tori Carey received top honors from Oprah Winfrey during herÂ Atlanta “The Life You Want” Weekend, an eight-city arena tour and transformational weekend. Black Girls Run is an Atlanta-based national running group created to combat obesity amongÂ  African-American women. Hicks and Carey are the first recipients of The Toyota “Standing O-Vationâ€ award, eightÂ of which such honors are to be presented at tourÂ stopsÂ this fall.

The ToyotaÂ “Standing O-Vationâ€Â recognizes extraordinary people who are making positive changes in their communities and inspiring others to do the same.Â  Winfrey andÂ Team Toyota brand ambassador Amy Purdy honored Black Girls Run with a $25,000 grant from Toyota.

Black Girls RUN! was formed by Hicks and Carey to increase the number of African-American women who run, improving their fitness, quality of life, and ultimately decreasing the number of African-American women who are overweight.Â What began with a blog has grown into a network of more than seventy groups and hundreds of thousands of members across the nation.

“We are still in shock at what happened tonight and cannotÂ believeÂ we were chosen to receive this once-in-a-lifetime honor,â€ says Hicks. Â “Eighty percent of African-American women suffer from obesity, and this group was a way to get women moving. ThisÂ honor gives us the opportunity to take Black GirlsÂ RUN!Â to the next level, allowing us to serve our community even further,” adds Carey.

The driving force behind The Toyota “Standing O-Vationâ€ stems from the automaker’s commitment to fostering women’sÂ interests. While reflecting the kind of stories that define the brand, this award is an opportunity toÂ celebrate remarkable women who are not only making the world a better place, but also motivating others to spark theirÂ own journey of personal change, states the automaker.

Each tour stop of “Oprah’s The Life You Want Weekend” spans two days. On Friday nights, Winfrey takes the stage with her personal story and insights to life. Then on Saturdays, she leads a day-long gathering of thousands with handpicked thought leaders and pop culture icons including Iyanla Vanzant, star of the OWN series Iyanla Fix My Life andÂ best-selling author ofÂ Eat Pray Love, Elizabeth Gilbert. Additionally, world-renowned author and pioneer in mind-body medicine Deepak Chopra will take the stage in select cities.