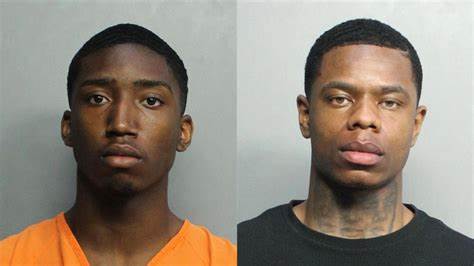 Two Black men are being charged with rape and burglary of a white woman during spring break in Miami.

Collier, 21, and Taylor, 24, both men from North Carolina, are accused of sexual battery, burglary, credit card fraud, and theft, and are being held without bail, CBS reported.

At a press conference, it was said that the Black men met Englehardt at a restaurant and drugged her with an unknown green pill substance.

It is not clear if Englehardt knowingly or unwittingly took the pill.

Later that day, the men were caught on camera entering her Albion Hotel room, which police are not certain Collier and Taylor had permission.

Inside her room, an Albion staffer found Englehardt lifeless and half-naked the next day.

“They had sex with her multiple times and once she was unconscious, or out, they remained inside the unit. Did not call for assistance or help and began to take all her items from inside the apartment,” Miami Police Detective Luis Alsina said.

A police search was conducted and law enforcement was able to apprehend Collier, who was wearing the same pair of pants seen on surveillance footage, and Taylor, who tried to use Englehardt’s credit card at a liquor store.

Taylor also had the victim’s phone and the alleged green pills in his bag.

As theGrio reported, Miami Beach declared a state of emergency during spring break. It was reported that more than 1,000 spring breakers were arrested, including some having their guns seized—80 guns were taken away.

City Manager Raul Aguila, “[People came to Miami Beach] to engage in lawlessness and an anything-goes party attitude,” he said.