Book Review: Chasing Youth Culture and Getting It Right 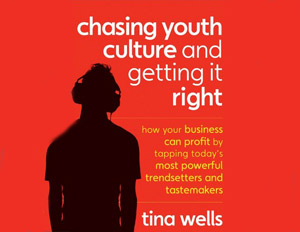 In her new book Chasing Youth Culture and Getting It Right: How Your Business Can Profit by Tapping Today’s Most Powerful Trendsetters and Tastemakers, Buzz Marketing Group (Wiley, $16)–scheduled for release on April 26th, one week from today–Buzz Marketing CEO Tina Wells urges you to market to teens, tweens and young adults not by age alone, but by “tribe.” Citing her company’s research, as well as the success and failures of company’s marketing their goods and services to young consumers, Wells identifies four primary tribes:

The Wired Techie, driven by the need to be the first to discover, use and recommend new tech devices and gadgets.

The Conformist Yet Somewhat Paradoxical Preppy, traditional yet trendy buyers who are driven to want to fit in and belong.

The Always Mellow Alternative, who deviate from mainstream buying habits in order to pursue and support causes they believe in.

The Cutting Edge Independent, who deviate from the mainstream just for the sake of it.

While it’s difficult to accept that Wells’ tribes truly represent the totality of the thinking of tweens, teens and young adults, her book underscores an important reality of sales and marketing in the age of The Long Tail: Why The Future of Business is Selling Less of More ($10, Hyperion)–Chris Anderson’s must-read book about the changing nature of consumer choice and tastes in a largely digital marketplace: targeting consumers by age, race, gender and other traditional demographic markers alone is no longer enough for a business to be effective and, ultimately, profitable.

When it comes to marketing to youth, comes with unimpeachable bona fides. Already a 15-year veteran in the marketing business, she started Buzz Marketing as an 18-year-old, quickly carving out a niche and establishing a knack for understanding the trends, tastes and influences driving young consumers. Eventually graduating with honors with a B.A. in communication art from Hood College in 2002, and currently earning a marketing management degree at the Wharton School of Business, Wells creates marketing strategies for clients in the beauty, entertainment, fashion, financial and lifestyle sectors. Her clients have ranged from Sesame Street Workshop and PBS to American Eagle Outfitters and SonyBMG. Today, Wells, an expert contributor on entrepreneurship to BlackEnterprise.com, is well established as one of America’s most honored and celebrated young entrepreneurs.

So it’s no surprise that Wells brings and authoritative voice to Chasing Youth Culture and Getting It Right, confidently explaining the diverse world views of young consumers while smartly taking into account parents, as both their primary financial resource and the people with the most influence on their values. Wells also breezily illustrates, using vignettes of real young people who were subjects of her company’s survey, the impact of social media, globalization and the Great Recession on the “new millennials.” She also courageously weighs in on how young consumers feel about everything from environmentalism and corporate America to hypersexual content and America’s two-party political system.

In fact, sometimes Wells is over confident, making bold, sweeping overstatements about this or that aspect of the way young people think. For example, her description of “Global Mobiles” –young people who “live in a world without geographic or cultural boundaries” –is a stretch, conveniently overlooking the millions of young people, particularly low-income rural and urban Americans, who are hardly conscious of how people live on the other side of the tracks, much less the other side of the world. (Think Shawn Carter in the Brooklyn’s Marcy Projects before he became Jay-Z, the mogul and global citizen.) While global mobiles abolutely exist, it’s too early to categorize them as a dominant factor in marketing.

The other major weakness of the book is that it so many examples of companies’ failed and/or successful efforts to market to youth culture that Wells ends up quickly glossing over most of them, causing them to lose some of their illustrative impact. I wish she’d used fewer examples, which would have allowed her to more effectively use those that remained as more enlightening and instructive case studies.

That said, if you’re a marketer or entrepreneur who wants to tap into the spending power of the generations of consumers who will drive the national and global economies over the next several decades (and come on, who doesn’t?), then you cannot afford to not read Chasing Youth Culture and Getting It Right. The book is both confirmation of Well’s formidable track record as an expert on the trends and tastes of young people, and powerful evidence of her prowess at using her immersion in her chosen area of expertise to peer around the corner into a future consumer marketplace, one that is evolving as unpredictably as it is quickly. Chasing Youth Culture and Getting It Right does solve all of the mysteries of marketing to young consumers, but it most certainly provides the most necessary, fascinating and useful clues.

Tina Wells is CEO of Buzz Marketing Group and is a columnist for BlackEnterprise.com. Follow her on Twitter at @tinacwells and check out her new book, Chasing Youth Culture and Getting It Right, available now on amazon.com.