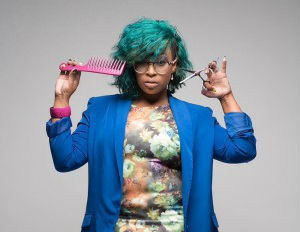 A Birmingham, Alabama native, and a 10-year veteran in the hair industry, MiMi Luvshair is creating a name for herself through education, salon management, and events. MiMi’s work speaks for itself as a winner of several hair competitions across the industry, and as a member of Patric Bradley’s Team Hollywood. She has worked alongside celebrity fashion stylist Ryan Christopher and celebrity makeup artists Sylvia Pro and Cherry Brown. MiMi is the current owner of Vamousse Hair Salon in Birmingham, Alabama.

“I go by MiMi Luvshair because I really love hair. I am working to make a name for myself in the industry. My name means a whole lot to me and I want it to speak volumes. I have been a salon owner for about three years, and I never would have thought I would be where I am today. I am able to show people hair from my own perspective,â€ says MiMi.

One of MiMi’s most recent accomplishments was the very successful production of “Slay the Runway: A Total Look Competitionâ€ in November 2015. The competition brought together stylists from the SE to compete for a $3,500 grand prize. This wasn’t an ordinary hair show; the lineup included comedian Steve Brown as the host; celebrity guest judge Brooklyn Tankard, star of Bravo TV’s Thicker than Water; celebrity fashion stylist Ryan Christopher; and celebrity hair stylist Jaylon Aaron.

“The show was phenomenal, everyone did a great job, the competition was fierce.â€ —Sylvia Pro, celebrity makeup artist

“I really enjoyed myself, something new to Birmingham and I am looking forward to 2016.â€ —Jaylon Aaron, celebrity hair stylist

Slay the Runway was indeed a fresh and new event to hit Birmingham. The looks were amazing, and the production lived up to its name; they “Slayed the Runway.â€ MiMi funded the entire show out of her own pocket with zero sponsors! She stepped out on faith and it resulted in an awesome event.

A philanthropist at heart, MiMi enjoys giving back to the community. A portion of the show’s proceeds was sent to Pathways, a women’s homeless shelter. “I love to give back. I see a lot of women who are not able to afford to get their hair styled or enhance their appearance in general. I want to be able to teach them how to shop and put looks together without spending a lot of money,â€ MiMi expressed.

Despite her accomplishments and success, MiMi prides herself on being humble and approachable. “I can adapt in any situation. I am like the girl next door. I don’t want people to ever feel like they can’t approach me because I am a salon owner, or put on shows, or dress a certain way,â€ explained MiMi.

Click here to see footage of MiMi’s Slay The Runway competition. You can also learn more about MiMi by visiting her website,Â vamoussehairsalon.com, or by following her on InstagramÂ @mimi_luvshair.

Author Chanel Martin (@ChanelEbone) is a co-founder and chief operations officer of Techturized (@Techturized) Inc. She is also a wife, new mom, and lover of all things hair. She works full-time at Techturized. Techturized’s first product, Myavana (@Myavanahair), provides haircare personalization for female consumers around the world. Learn more at www.myavana.com and www.chanelemartin.com.