Cain Vs. Obama: A Comparison of Economic Issues - Black Enterprise 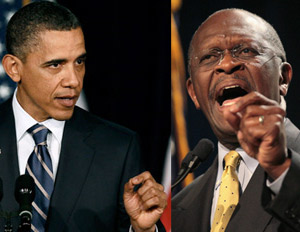 If you think Herman Cain versus Barack Obama is not possible, think again.

Just as President Obama defied the odds when he scored a decisive 2008 election victory, so too is Cain so far defying the odds with his unlikely status as the Republican Presidential frontrunner.

A mid-October 2011 Rasmussen survey of likely U.S. voters even showed Cain garnering 43% support, while Obama earned 41%. So again, anything can happen.

Whether or not Cain can maintain his popularity and ultimately earn the Republican Presidential nomination in 2012 remains to be seen. Meantime, here’s a look at how Cain stacks up against Obama, based purely on economic issues.

Cain: His tax and economic policy can be summed up as the “9-9-9 Plan.â€ Under this proposal, Cain would overhaul America’s current tax code with a 9% personal income tax, a 9% business transactions tax, and a 9% federal sales tax. Cain has touted his plan as one that “expands the baseâ€ of taxpayers, thereby allowing the “lowest possibleâ€ rate of taxes for everyone.

But others have challenged Cain’s figures and assumptions, arguing instead that the poor would bear a greater tax burden. Other critics have even ridiculed “9-9-9â€ as lacking in merit and substance. In response, Cain recently tweaked his plan to carve out exclusions for low-income Americans. Nevertheless, Cain is steadfastly defending his idea, which would ultimately involve abolishing the IRS as we know it, removing all payroll taxes, reducing capital gains taxes, and eliminating the death tax.

Obama: The President has consistently called for “comprehensive tax reformâ€ via greater tax breaks for the poor and middle class and increased taxes on America’s wealthiest citizens — especially millionaires and billionaires. At a fundraiser in Dallas in October, the president told the crowd: “I’ll tell you what, if asking a billionaire to pay the same tax rate as a plumber or a teacher or a bus driver makes me a warrior for the middleÂ class, I will wear that charge with honor.â€

Highlights of other tax-related proposals by Obama include: allowing the 2001 and 2003 tax cuts for upper income earners to expire ($866 billion); limiting deductions and exclusions for those earning above $250,000 annually ($410 billion); and closing corporate loopholes and eliminating special interest tax breaks (roughly $300 billion).

FacebookTwitterYoutube
← Finding Life Balance, Day 6: Make Joy and Contentment Your Lifestyle ← 10 Signs You Work Too Much
×