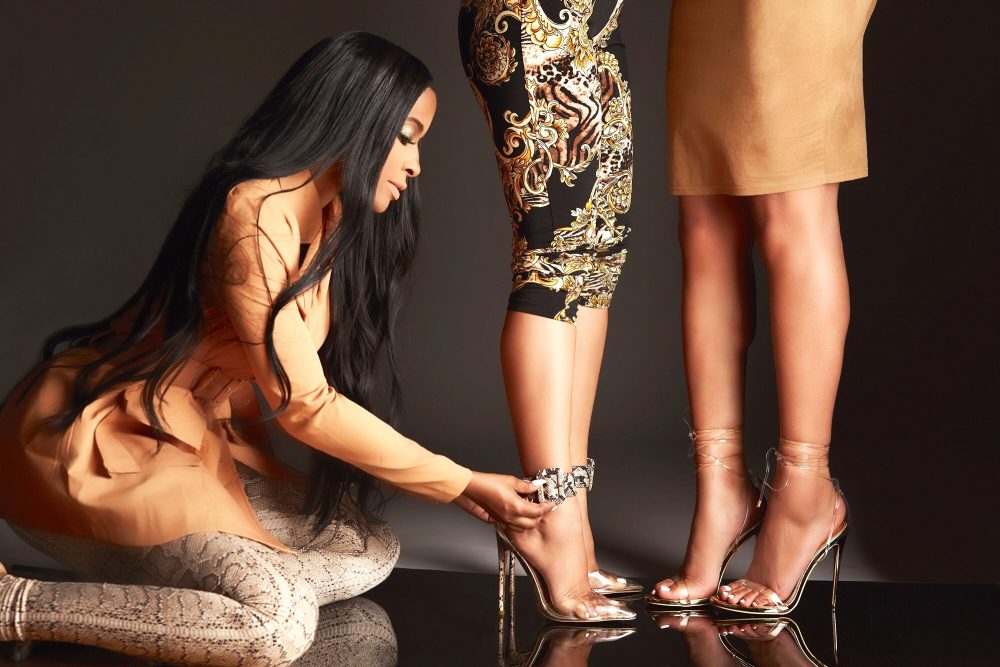 Walking a mile in an entrepreneur’s shoes is no easy feat. Especially when they are in a lane of their own and breaking into industries with high barriers of entry.

Shoe designer and entrepreneur Jessica Rich, founder and CEO of Jessica Rich, has had that experience firsthand. Rich gracefully transitioned from the world of media and entertainment as a former TV personality to a designer of some of the most sought out stilettos on the market. Cardi B, Jennifer Lopez, Fantasia, Kylie Jenner and others can be found strutting in her transparent heeled sandals and pumps.

Before Rich became a self-taught designer, she was monetizing her industry contacts to work as a fashion PR professional and had a passion for fashion since childhood. Fast forward, Rich went on to own a clothing line and has designed for celebrities in the industry like Tami Roman, the Kardashian family, and more.

Pivot with a purpose

After thinking of ways to pivot from PR to fashion full time, Rich decided to drop her clients and design a shoe line. “The fastest thing I could think of to make money was to drop my PR clients and work toward having my own store.”

Two years ago, she decided to create success as a shoe designer once the clothing side of the fashion industry became saturated. After going to the drawing board, she sought out manufacturers to help bring her stilettos and sandals to life.

“I was in clothing so I knew where to find shoe factories. Once I found them, I got samples from two of them to ensure the quality was up to par. Once I figured that out, I went ahead and produced the full run with that company,” says Rich.

With hard work and dedication, Rich launched her collection online and the high demand to expand from her e-commerce business prompted her to stop working from home, build a team, and open a brick and mortar store.

“I didn’t plan to have a store. I was very content with working out of my house. Once I had like over 100 orders I was shipping out in a day, I thought, now I need a team,” says Rich. After outgrowing a number of office spaces, Rich decided to take a leap of faith and open a store on Melrose Avenue in Los Angeles.

And she says that it was a decision well made.

I can’t imagine not having a store now because of the space that I have. It’s large and we do a lot of things there like TV filming and events. And people who don’t order online ironically still walk into the store. I know a lot of stores are closing now, but people still want to walk in and try on shoes,” says Rich.

While Rich may make being a designer and business owner look easy, over the years, she has learned a number of business lessons that keep her grounded and ready for coming opportunities. Two of them being that relationships and consistency is key.

One of the ways that Rich has been able to expand her footprint online and in the industry is through her solid brand and reputation of being persistent. As a result of her business savvy and strong brand, Rich landed a retailing deal with Macy’s after pitching to other companies.

And with the popularity of her shoes, Rich has made sure to patent certain styles as other designers and retailers attempt to duplicate them.

“We do send cease and desist letters out because different factories will replicate our shoes without knowing that the style is mine and patented. So after we contact the stores, they’ll stop selling on my behalf because they don’t want a lawsuit.”

All things considered, Rich says that while she prayed to be successful, she didn’t imagine the number of accomplishments she’s made as a businesswoman over the last year.

“I had different companies that I did this for that got the success and I was just stuck with nothing. I didn’t walk away with a percentage of the company or anything. I was very depressed about it. Like, wow, what about now? I had to figure it out on my own, you know, so it feels good to know I am where I am supposed to be,” says Rich.

To those looking to follow their dreams, she encourages them to invest in their dreams and go for it.