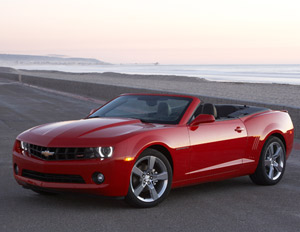 Last year, the Camaro outsold the Mustang without having a convertible in its line up. It’s been over 25 years since the Camaro last wore the new-vehicle sales crown and with the sporty convertible model as an all-new addition to the line up for 2011 Chevy may hold on to its position.

Having a canvas drop top in a 312-horsepower Camaro just heightens the cool factor in this four-seater muscle car. In fact, the vehicle looks just as hot with the top up, as it does topless. For a price point in the $30,000 range, this is definitely within reach for most car buyers.

With Chevy’s new addition, the convertible top on the Camaro can be easily raised or lowered at the push of a button and twisting a latch to lock it in place. Actually, the car doesn’t have to be parked for the top to be activated, allowing for spur-of-the-moment lowering while stopped at a stoplight. And while the top is down, an optional dealer-installed windscreen can be installed behind the front seats to limit wind buffeting.
Also, unlike convertibles of the past, the body doesn’t twist or turn when driving over bumps. The folks at GM were able to do this by bolstering the structure of the suspension rather than softening it. This results in a convertible that preserves nearly all the acceleration, road-holding and performance capabilities we found in the Camaro coupe. Added to that, GM engineers reinforced the structure of the vehicle by improving the noise and vibration characteristics, while also contributing to the elimination of cowl/steering wheel shake, which was a common problem of past convertibles.

Furthermore, adding the RS package, which consisted of 20-inch painted wheels, high-intensity headlights and a rear spoiler, enhanced the overall appearance and ride of the convertible I reviewed. Chevy’s engineers also gave the Camaro convertible a clean look by placing the AM/FM radio antenna inside the rear spoiler. According to the folks at GM, this patent-pending design creates a sleeker appearance. For LT models without a rear spoiler (without the RS package), the combined antenna is located in the center of the deck lid.

Ironically, due to the frigid temperatures and the ATL’s recent stormy days, I spent more time with the canvas top up than down. While “Hotlantaâ€ didn’t live up to its name, I managed to squeeze a few snapshots with the top down–before the frigid dreary weather returned.

And like most convertibles, the trunk space is limited when the top is down. Now while the relocation of the trunk lock switch cylinder cleans up the Camaro’s appearance, it seems quite unusual to find the trunk release switch located between the rear seat back cushions. (As a side note, the keyless remote fob also offers easy trunk access without looking for the trunk switch).

With additions like the convertible being added to the Camaro line up, the cool-looking sports car will continue to give the Mustang convertible a run for its money. The drop top Camaro’s fresh, eye-catching appeal is sure to win over a number of Ford buyers and possibly a number of import converts, too. With the top up or down, this well-built convertible is a winner in my book. Both young and old will be saving up their coins to relive the old days again with the spanking new Camaro convertible.