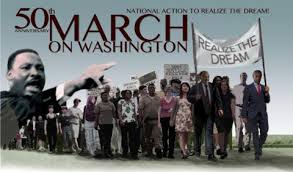 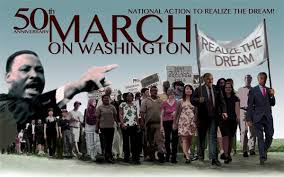 The 50th anniversary of the historic March on Washington is bringing a host of labor groups and civil rights activists to the nation’s capital this weekend and next. While the actual March on Washington took place on August 28, 1963, thousands will gather in DC on Saturday, August 24, to mark the momentous day on which Martin Luther King Jr. gave his renowned “I Have A Dreamâ€ speech.

A rally at the Lincoln Memorial and march along the same route taken five decades ago that drew 250,000 spectators to the King Memorial will take place on Saturday. A second march and rally is slated for August 28 on the National Mall with President Obama expected to speak from the steps of the Lincoln Memorial as part of the commemoration.

The events are more than commemorative but are about righting unfinished business, according to organizers such as the Rev. Al Sharpton, whose National Action Network is co-sponsoring the Saturday march and rally.

“While we celebrate 50 years of progress, we still have not achieved the dream of Dr. King,â€ he says.

NAN has invited such groups as the National Black Justice Coalition, the Human Rights Campaign, and the National Gay and Lesbian Take Force to take part in the rally. Sharpton says he wants to make sure that those members of society who were not fully represented in 1963 will be major speakers in 2013.

“Fifty years later, we see civil rights is not just about blacks. It’s about LGBT people, women, and immigrants.â€

Coalitions participating in the rally will call for the restoration of the Voting Rights Act; comprehensive immigration reform; for Congress to pass the Employment Non-Discrimination Act, making it illegal to fire workers or deny employment based on sexual orientation or gender identity; and, several other key priorities of the civil and human rights movement.

“The 1963 March was for jobs and freedom, the March in 2013 is about jobs, social justice, LGBT equality, and criminal injustice (i.e., ending Florida’s stand your ground law), says Melanie Campbell,” a key organizer of the March and head of the National Coalition on Black Civic Participation.

“This not a look back but a look ahead,â€ says Wade Henderson, president and CEO of the Leadership Conference on Civil and Human Rights. He notes that this year’s march will be more diverse than ever, with Arabs, Latinos, and women playing leading roles.

The commemorative marches also will highlight the role of the late Bayard Rustin, the openly gay executive director of the original March on Washington for Jobs and Freedom, who was awarded the Presidential Medal of Freedom on August 8th. Â “Bayard was silenced at the 1963 March. Fifty years later, the LGBT community is being embraced and counted as a full partner,â€ Wade adds.

“Rustin’s indispensable contributions to the ethos of our country continue to reverberate and push us toward a more just and fair society,â€ says Sharon J. Lettman-Hicks, executive director and CEO of the National Black Justice Coalition. “This will be a week of solidarity building by (and for) a strategic collective movement.â€

“We will show up for the march and all events in solidarity,â€ reiterates Rev Darlene Nipper, National Gay and Lesbian Task Force. Civil and human rights leaders will stand together on all issues, including unemployment, gun violence, poverty, and Â “wanting full immigration reform to provide citizenship to 11 million people.â€

Saturday’s rally will take place from 8am to 3pm (EST) at the Lincoln Memorial, followed by a short march. More info on this week of events is available at http://nationalactionnetwork.net/mow/.

Study: Many Workers Leaving Money on the Salary Negotiation Table

Protect Yourself from Medical Identity Theft