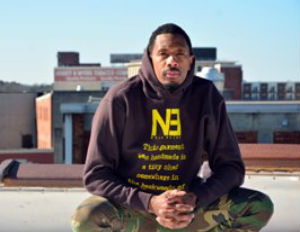 If you pay close attention, you can spot Rick Moore’s designs on celebrities such as Kevin Hart, Omari Hardwick, and Kerry Washington. He also customized a letterman jacket for Hollywood powerhouse Tyler Perry. Moore’s clothing line, Nyla Elise, named after his daughter, has steadily been on the rise since its inception in a one-bedroom apartment in 2009.

Moore’s T-shirts and tanks, which bear popular slogans like “Film is my ammo,â€ and “This garment was handmade in a tiny shed somewhere in the backwoods of North Carolina,â€ are sold nationwide via the Nyla Elise e-commerce site (www.nylaelise.com) as well as in boutiques. But a sweet spot for Moore has been his ability to sell his clothing at festivals throughout the year. Nyla Elise was a fixture in 2014 at the American Black Film Festival and the Urban World Film Festival–where his T-shirt design celebrating the 14th anniversary of the film Love and Basketball was a hot commodity.

Nyla Elise’s T-shirts, tanks, sweat suits, hoodies, and letterman jackets range from $20 to $5,500. As Moore sees it, people are paying for the story behind the high-priced jackets and buying not just an article of clothing but a piece of art, a piece of history. One of his daughter’s favorite designs is one of the company’s first–the one with her baby handprint, which Moore calls the vintage logo. He also believes in offering a gourmet T-shirt line and a standard tee, taking a page from the book of designers like Ralph Lauren, who will produce three different lines that cater to moderate and upscale customers. Last year’s sales for Nyla Elise came to about $125,000, but Moore expects to top $310,000 for 2015.

Moore knows how to sell. He’s not afraid of rejection, and he’ll pitch to anyone. But now he says he has to find a way to grow. “I have outgrown my pockets. I can’t fund this machine anymore out of my pocket,â€ he says. But getting others to fund it hasn’t been easy.

Moore was invited to work out of American Underground, a thriving campus for entrepreneurs in Durham, North Carolina, but he declined, more interested in securing financial backing. He tried to persuade American Tobacco, a tech startup accelerator and incubator program, to give him working space and funding although his company is non-tech, but was unsuccessful.

Through a friend, Moore discovered that Chris Heivly, a co-founder of MapQuest who sold it to AOL for $1.2 billion, worked at American Tobacco. Heivly is the managing director of The Startup Factory, which funds tech startups. Moore “coldâ€ walked into Heivly’s office hoping to convince the billionaire that he was worth an investment. Moore didn’t get funding, but he is working out a partnership whereby he can share a co-working space at American Tobacco with the North Carolina Central University School of Business Entrepreneur Lab in exchange for mentoring students.

For the most part, Moore’s T-shirts are limited editions: he ceases producing one design and introduces a new one every month. “That makes the shirt more of a hot commodity,â€ he says. He has more than 150 designs.

However, that business model doesn’t always work well with a major retailer. Moore was a participant in the Workshop at Macy’s, an exclusive, free training course aimed at high potential minority and women retail vendors. “Macy’s chooses 1,000 out of 38,000 applicants. I made it to the final 24. They pick 12 people for the program–I was the 13th.â€ He did, however, receive mentoring from a Macy’s executive and was offered the opportunity of altering one of his New York skyline T-shirt designs to incorporate the Macy’s logo. “That deal fell through,â€ Moore says.

As one door closes, however, another opens. Moore has formed a strategic alliance with the multinational computer tech company Lenovo. “With the Lenovo relationship I am looking to branch into wearable technology,â€ says Moore. While it is too soon to tell if he will be designing jogging suits with heart monitors, he is working on laptop screen designs and other items that will make tech devices more personal. Though Lenovo hasn’t provided funding for Nyla Elise yet, executives asked Moore to help them design wearable technology and have given him computers and tablets as compensation for now.

“I will be using Lenovo’s products to create Nyla Elise designs and to enhance my printing process and messaging,â€ Moore says. He is a participant in Lenovo’s Insider’s Program, which is made up of Lenovo brand ambassadors–selected individuals across the globe who connect through social media and advocate the Lenovo brand. “It is a global partnership that we are embarking on,â€ says Moore.

That alliance came about as a result of Joe Scarborough, a senior specialist in video production at Lenovo who has been buying Moore’s products for years and wanted to get him under the Lenovo umbrella. “If I do my part and bring awareness to their brand, they will bring funding to me,â€ Moore adds.