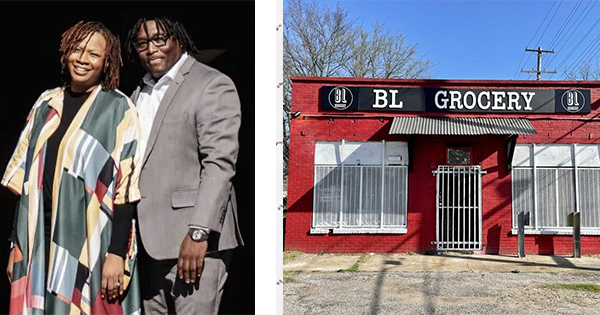 Jerrell Spencer and Ursula Martin, a couple from South Memphis, Tenn. have opened a Black-owned grocery store called BL Grocery which aims to provide fresh produce and hot meals to a community that has become a food desert.

“We wanted to provide access to food in a food desert,” Martin told Commercial Appeal.

“We’re not at all saying that we won’t provide traditionally what you will see in a corner store. We will, but you will also be able to come in and buy an apple, buy a bell pepper, an onion, one pound of ground beef. That kind of old-school grocery store feel is what our vision is.”

BL Grocery, which stands for Black Lives Grocery, was inspired by the Black Lives Matter movement, the couple said. Through the grocery, the couple wanted to serve the community by making fresh and healthy food more accessible to them while at the same time drawing attention to justice.

Spencer, who is a gourmet chef, and Martin, who is a registered nurse, said they have always wanted to own some form of real estate. And when they found a store in South Memphis, which has been out of business, they thought it was a great opportunity to open one by themselves. They eventually found that the building was bank-owned and they acquired it through bidding.

Knowing that Kroger closed two of its locations there, the couple hopes the grocery in the food desert makes a lasting impact in the neighborhood. At BL Grocery, they will sell fresh fruits, meats, as well as cooked foods while also supporting local farmers and vendors as much as they can.

“Our hope is that every person in that community from birth to end of life will be had to be impacted by the access to food in the middle of a food desert,” Martin said.