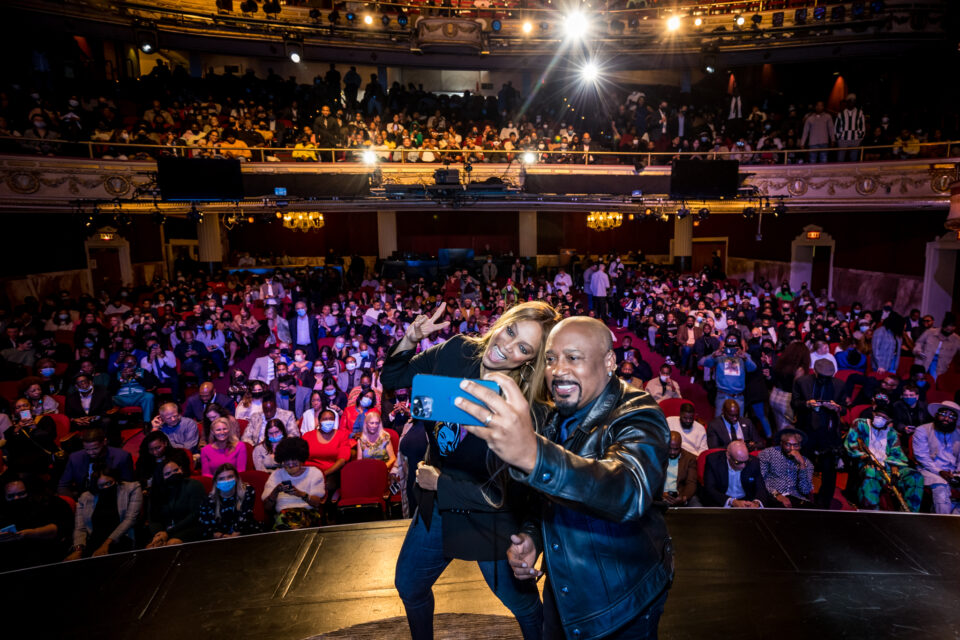 John and his team came up with Black Entrepreneurs Day as a platform to aggregate a wealth of information that will help entrepreneurs launch and grow their businesses and position them to make their own decisions and not be at the mercy of others.

Here’s a recap of the celebrated Black Entrepreneur’s Day event.

This historic landmark in the Black community is where music legends are made. Perhaps because the Apollo has been closed for so long due to the pandemic, the guests in attendance felt the magic in the air as the audience waited in anticipation for the show to begin, the packed theater buzzed with energy.

Before the event, Sekou Kaalund, Head of Consumer Banking at JP Morgan Chase for the Northeast and former Head of the Advancing Black Pathways initiative, shared his thoughts on being a part of such a pivotal event for Black entrepreneurs.

Comedian Capone, who hosts Amateur Night at the Apollo, opened the show and kept the audience entertained throughout the five-hour star-studded evening, sponsored by Chase for Business, The General Insurance, T-Mobile for Business, Salesforce, Shopify, and Yappa, among others.

After a brief introduction from Daymond and co-host Angela Yee, Michael Strahan joined the stage. He talked candidly about growing up as an Army kid and moving to Germany when he was 9-years-old. Strahan shared some of his professional struggles—much of the rejection he faced while in the NFL and then trying to crossover from the NFL into media. He emphasized, “You have to work for everything. No one owes you anything. No one is going to save you.”

The conversation with Strahan was also light-hearted as John asked him, “Why didn’t you fix your gap with all the money that you have”? Strahan laughed and responded, “[My teeth] may not be together, but they are straight,” adding, “It just wasn’t me. I’m not perfect, and I’m not trying to be perfect.”

Daymond’s conversation with Janice Bryant Howroyd, founder and CEO of The ActOne Group, and the first African American woman to own and operate a multibillion-dollar company, felt something like getting mentored by your favorite aunty. When asked how she had the fortitude to keep pushing in her business, Howroyd quipped, “You don’t get a diamond without applying pressure, Daymond! And I know a little bit about diamonds.”

Tyra Banks, who has parlayed her modeling career into business and entrepreneurship and currently teaches personal branding at Stanford University, lit up the stage with energy as she shared helpful tips to give entrepreneurs a competitive edge: “I tell my students, different is better than better…Differentiation is what makes you stand out.” And with that philosophy in mind, she described her newest creation—Smize Cream— a company blending fashion, ice cream, and entertainment, which she excitedly proclaimed will be the “Disney of ice cream!”

In between the “Game Changer Conversations,” John chatted on-screen with entrepreneurs and awarded 10 small businesses each with $25,000 in “NAACP Power Shift Grants.”

John also brought to the stage business executives, like Minea Moore at Salesforce, who discussed the value of entrepreneurial ecosystems.

The show was bookended by an intimate performance from singer Khalid, who appeared affable and even shy at times, performing signature songs like “Location” and “Talk.”

For what Black Entrepreneurs Day promised, it delivered—an evening of entertainment showcasing Black businesses and Black excellence, with much celebrity flair. And for Daymond John, who used to hustle and sell his FUBU hats right outside the Apollo theater, this had to feel like a full-circle moment.

To watch the full recap of the event, stream it here.