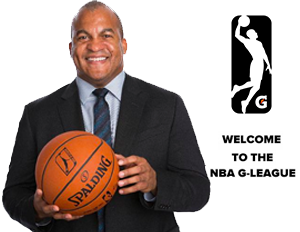 Recently, the pathway has been expanded for people of color, enabling them to showcase their talent and position their businesses to take part of the growth pattern occurring within the National Basketball Association (NBA). Affectionately known as the “sports fuel company,” Gatorade’s new partnership with the NBA has stimulated a rebranding campaign of its minor league, with the league even adopting the name of theÂ popular sports drink brand.

Dating back to November 2014, National Basketball Association Commissioner Adam Silver noted that the top priority of Malcolm Turner, the incoming president of NBA’s minor league, was to secure an entitlement partnership deal for its growing list of teams, the purpose of which being to increase the revenue sources for the league. Other fan-favorite sports–like NASCAR’s second-tier circuit, which was known as “The Nationwide Series” through 2014, when the name was changed again to “The Xfinity Series”–has experienced success in offering similar entitlement partnerships.

Now armed with this knowledge, the primary questions you’re probably asking yourself are:

Before we dive into unveiling the answers to what winning elements of a partnership have the potential to create a positive, economic impact on you and your business, let’s learn more about National Basketball Association’s D-League.

The NBA Development League,Â also known as the D-League, is the minor league of theÂ National Basketball Association, which operates as a wide-scale apprentice program to groom players, coaches, front-office staff, and officials for their next level of greatness, within the NBA organization.

“We are very focused on launching successful businesses with all of our teams,” saysÂ Malcolm Turner, president of the NBA D-League.

Malcom Turner, President of the D-League, Talks Strategy and Growth

In an exclusive #techieSpotlight interview,Â Malcolm Turner shares more about the league’s growth strategy, innovation, and new small and mid-sized business opportunities, with more launching during the 2017-2018 season, when the D-League will officially be known as the NBA G-League, as a result of the Gatorade partnership.

Check it out below:

How the Partnership Can Benefit Business and Create More Opportunity

NBA D-League is an innovation lab, where league related technology and advanced training methods are tested before launching for all 30 NBA teams. Now as the G-League, the organization will accomplish this goal more effectively, by gaining scientific insight and expertise from the Gatorade Sports Science Institute (GSSI).

The GSSI employs scientists that study nutrition and how it interacts with the human body before, during, and after physical exercise. G-League teams will obtain advice and counsel from GSSI scientists on how to maximize the performance and health of players via research, education, innovation, and high caliber sports nutrition science.

Since its inception, the Gatorade brand is one that’s always been associated with sports, especially basketball. Â We continuously see numerous basketball athletes refueling their electrolytes by drinking Gatorade to ultimately enhance performance. Today, Gatorade is among the most popular sports drinks for consumers, as well. Hopefully, the NBA minor league’s alignment with Gatorade will aid in boosting this league’s notoriety, because this could lead to an increase in game and special event attendance as well as local tourism and nightlife revenue.

Producers, filmmakers, bloggers,Â and social media storytellers–sharpen your keyboards; now, you have a multitude of untapped stories to showcase. Various teams in markets are awaiting the opportunity to partner with media outlets that can help share the journey of its players and teams. Check out the franchise map to discover the teams in your area.

The new Collective Bargaining Agreement (CBA) will enable increased interaction between NBA and D-League rosters.. There will soon be two-way contracts for players, which means, whether a player is assigned to an NBA team or is an NBA team G-League affiliate, they will be paid different rates, depending on who they play for.

According to Sports Illustrated, two-way contracts have not been announced yet. Rather, it’s expected that two-way players, while assigned to G-League teams, will earn prorated pay, based on an annual salary worth somewhere between $50,00 and $75,000. In contrast, when those same players are on NBA rosters, they will likely earn prorated pay based on the NBA minimum salary.

This is not just a cool, coined phrase of the sports docuseries; this means that all 30 NBA teams will have their own minor league team. The 30 for 30 policy will create plenty of opportunity for small to mid-sized business vendors from tier-two and tier-three markets, across America.

According to Malcolm Turner, based on the recent minor league expansion deal of the Memphis Grizzlies, “Memphis [Grizzles] are also looking to grow, [and] use that new business of theirs to extend its business relationship with the Greater Memphis Mid-South business community. They will be looking to strike new business partnerships that, perhaps, will support the Memphis Grizzlies. Also, theÂ new relationship can help underpin their yet-to-be-named D-League team.”

Who is Malcolm Turner? Learn more about his journey to the NBA, in this one-on-one interview with Nathaniel J.:

Also, don’t forget to take advantage of the upcoming opportunities that will be made available in multiple markets this season via the NBA G-League.