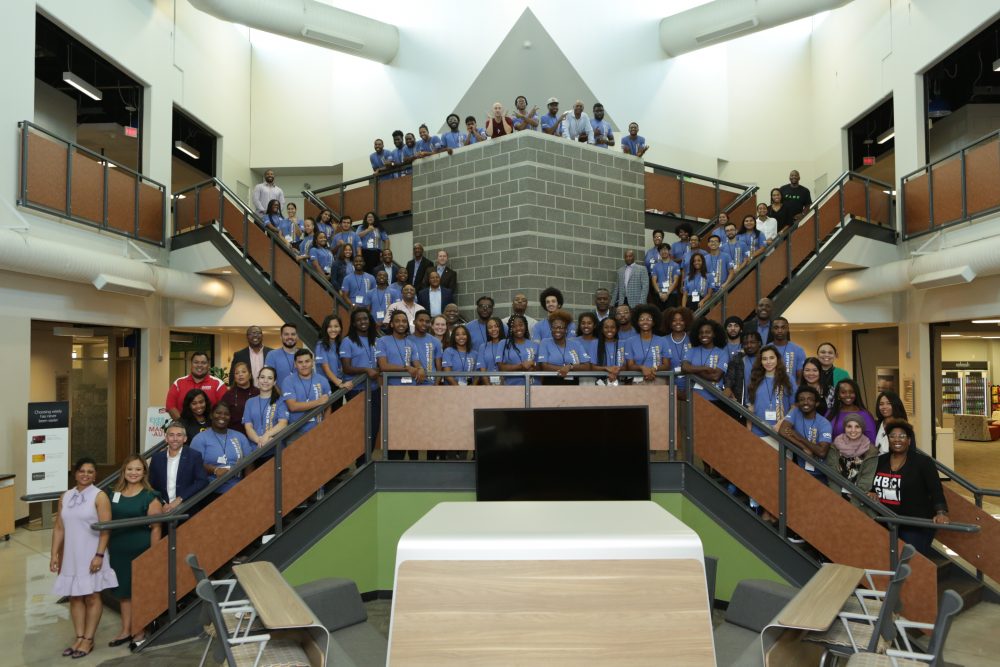 In 2018, leaders from Dell Technologies and Black Enterprise brainstormed ways that they could get more diverse young talent into the tech pipeline, and they landed on a joint event that would cater to black and brown students. After nine months of planning, the BE Smart Student Symposium came to life at Dell Technologies’ headquarters in Round Rock, Texas.

In September, 56 STEM, marketing, and business students (40 students from 10 HBCUs and 16 Latino students from various universities in Texas) gathered at Dell Technologies for two days and interviewed with recruiters; heard from leaders within the tech industry; and participated in the BE Smart Dell Technologies Innovation Lab, where they worked on creating an app to help the company recruit and retain diverse talent.

“One of the major tenets of our publication was the application of education for the attainment of economic and financial empowerment, the pathway to the American dream. We are committed more than ever,” said Earl “Butch” Graves Jr., president & CEO of Black Enterprise. “This program builds upon that mission and also serves to facilitate the advancement of the pipeline of African American [and Latinx] talent that will continue to be so vital to driving innovation within corporate America and our nation as a whole.”

Dell Is Committed to Excellence

“This company was started by a young man, at that time, Michael Dell, who wasn’t much older than many of you. Like him, many of you will have ideas and you will impress the world and impact the world as much as Michael has around Dell Technologies,” said Reaves.

He went on to add, “Just like Michael wrote that first great chapter, back in 1984, we want you to be able to write the next three chapters of this company. And that’s what this event is all about.”

On the first day, the students participated in a workshop led by Maggie Chan Jones, Founder & CEO of Tenshey, on how to improve their transition from STEM student to professional in the tech pipeline, and interviewed with members of the talent acquisition team led by Dell’s Robert Simmons, University Relations Diversity Program Manager, and John Redmond, Talent Acquisition Senior Advisor.

Related: 5 Ways to Ace the Transition From College Grad to First Job

The students also got to engage with Dell Technologies’ strategic partners and members of the employee resource groups in the Exhibit Lounge. In addition, students were able to have their headshots taken to improve their LinkedIn profile.

The evening concluded with an exciting night at Top Golf in downtown Austin where the students, professors, and members of the Dell and Black Enterprise teams networked and enjoyed competitive games on the green!

A Morning of Inspiration

On the second day of the symposium, Ed Gordon, Emmy Award-winning broadcaster, opened up with an encouraging word to students on the importance of finding a mentor to guide them through the tech pipeline. He also introduced a surprise fireside chat between Reaves and Vernice “Fly Girl” Armour, America’s first African American female combat pilot, on the intersection of technology and leadership.

Take a look at photos from the event:

After a morning of engaging dialogue, the students began competing in the BE Smart Dell Technologies Innovation Lab Challenge where they worked on creating an app that aimed to help the company recruit and retain diverse talent. Each of the teams contributed their technical and non-technical skills to produce and present the concept and working products on the main stage to a panel of judges. All of the teams received feedback from Janice Glover-Jones, Chief Diversity Equality & Inclusion Officer at DIA; Preston James, CEO/Co-Founder of DivInc; Shana Eskridge, Audit Director at Dell Technologies; and Preston Hale, VP of Finance at Dell Technologies.

Once the student broke for the challenge, the morning continued with coffee and conversation between Dell employees and delegates where they chatted about the ever-evolving tech industry and the latest developments as they lead and instruct.

A Wealth of Knowledge

The afternoon kicked off with an engaging lunch-and-learn session on being an executive of color at Dell with Patrick Felder, VP of HR Business Partner; Mariely Franzetti, VP of Dell Digital Services; Ana Villegas, Senior Director of Field Marketing; and Jim Ganthier, SVP, Customer Solutions and Strategy, moderated by Gordon.

Redmond also gave a presentation on how to navigate corporate cultures.

The overflow of information sharing continued with a session on taking a pulse of the diversity pipeline with Allen; Dr. Fay Cobb Payton, Program Director at National Science Foundation; and Brian Vaught, SVP of Talent Inclusion at Publicis Group, moderated by Gordon.

As the final conversation of the day wrapped up, the moment that everyone was waiting for kicked off—the student presentations!

During the winner announcements and closing remarks, Quintos said that Dell Technologies was the ultimate winner for being able to engage with the students as the company builds its own tech pipeline.

“We are a company with a soul. Not only do we put out great technology, great products, and great solutions, but we care about our people. We care about the community, care about the environment, and we really care about giving back. So thank you for taking time to be here,” said Quintos.

The evening wrapped up with the ultimate farewell bash at the Archer Hotel in downtown Austin.

This year’s event was a great success and we plan on making 2020’s event bigger and better with Dell Technologies!