DeVon Franklin On 'The Truth About Men,' Working With Steph Curry and More (Video) 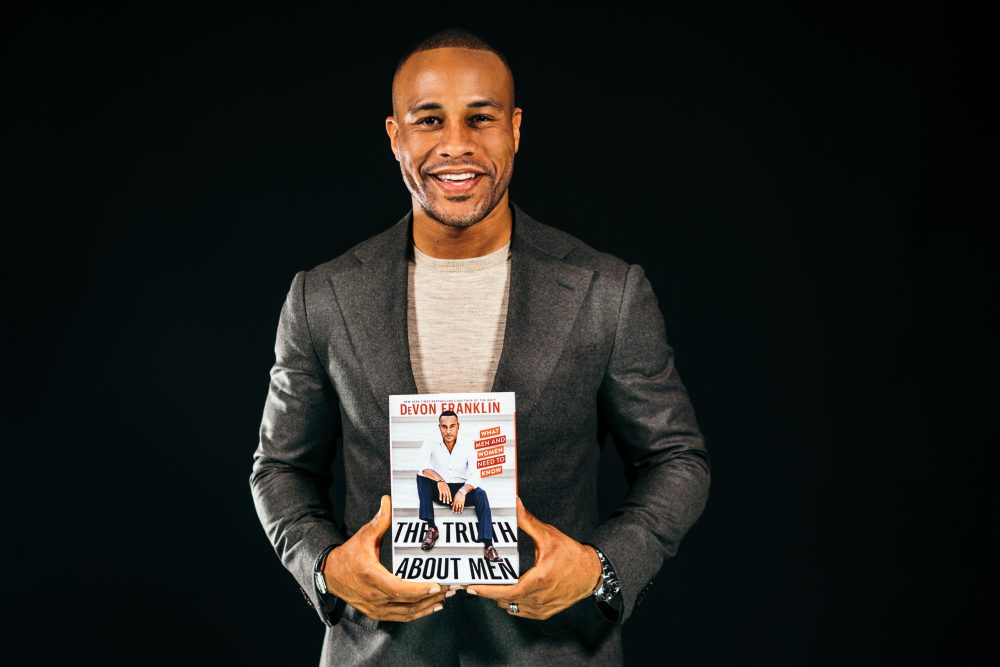 In a time when toxic masculinity is at the center of national dialogue, award-winning film producer and New York Times best-selling author DeVon Franklin is shifting the conversation toward finding solutions through his new book, The Truth About Men: What Men and Women Need to Know. The book, which will be released Feb. 5, takes a raw and compelling look at the struggles men wrestle with and offers a manual on how to change, love, resist temptation, and practice self-control.

The Truth About Men

Franklin says his book was inspired by a revelation he had as a teenager when he discovered that his father had cheated on his mother. “That really devastated me [and] rocked me to my core,” he told BLACK ENTERPRISE. “If my father cheated on my mother, then what does that say about me?… Does that mean the apple falls far from the tree or does it not?”

Franklin, who has been married to actress Meagan Good for nearly seven years, went on to admit that he, too, faces challenges. “My wife’s amazing. I love my wife, but that doesn’t mean that I have no struggles.” He continued, “The Truth About Men is identifying where we struggle as men and what can be done about it, and also giving women information along the way.” Ultimately, he says, the book is a call for men “to do better.”

In addition to his new book, Franklin is gearing up for the April 2019 release of his new film, Breakthrough, which is based on a true story about a 14-year-old boy who died in a freak accident but was then resurrected back to life by his mother’s prayers. Franklin said it only took him 24 hours to convince NBA champ, Steph Curry, to sign onto the project as an executive producer. “It’s the first film that he has put his name on and that he has helped bring to the world,” he said. “It’s a blessing.”

The film will be produced by his company Franklin Entertainment, a multimedia company that produces inspirational and commercial content. The company currently has a first-look film deal with 20th Century Fox.

Before launching his own production company, Franklin served as the former senior vice president of Columbia Pictures. During his nearly 10-year tenure at Columbia, he produced box-office hits like The Pursuit of Happyness and The Karate Kid.

As one of the few African American executive producers in Hollywood, Franklin spoke candidly about the lack of diversity in his industry. “The progress in Hollywood around diversity, specifically related to executives, is abysmal,” he told BE. However, he is trying to combat the issue as a newly elected member of the Academy of Motion Picture Arts and Sciences (AMPAS), where he chairs the executive branch subcommittee on diversity.

“It is a systemic problem and Hollywood has yet to put a successful solution around it and I am committed to being a part of that solution because we need it.”

The Key To Success

The Seventh Day Adventist preacher credits his career success to the discipline he practices in his life. “I believe no discipline, no destiny,” he said. “Too often, when we want something, but we’re not willing to discipline ourselves to get it, we actually never achieve it.” He continued, “part of discipline is not just delaying gratification, it’s also about sacrifice.”

He added, “Discipline is critical, it’s necessary, and it’s difficult. That’s why very few do it because it requires going without…However, “in the long run, discipline will yield tremendous, powerful results.”