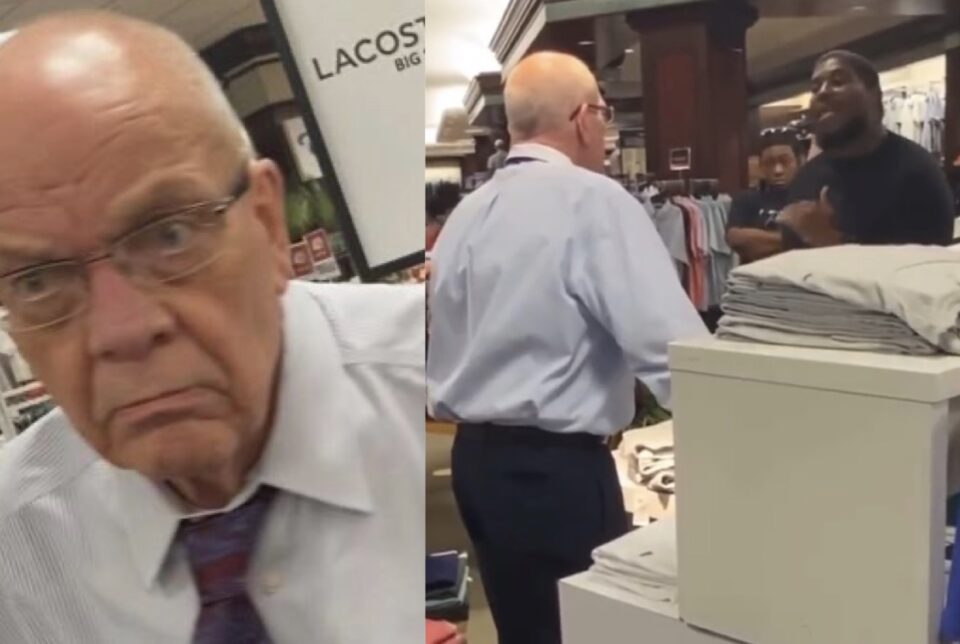 A Black shopper in North Texas gracefully confronted an old white Dillard’s department store employee after the worker called him and his 10-year-old son “f—ing n——.”

In a video that has garnered almost three million views, the Black dad identified as Muhammad Karim, says he asked the worker who he refers to as Homer but could not be verified by his nametag, for directions to a dressing room.

Upon returning to his son, he saw the child was crying.

“A tear came out my baby’s eye and he said, ‘Dad, you didn’t hear what that man just called me?'” said Karim.

In the video, the father can be heard asking the worker, “I ask the question: what could he have done? What could the 10-year-old do to Homer to deserve to be called a ‘f—ing n—–?’

“It’s unacceptable, you shouldn’t do that. You don’t know the impact of what you’ve done to my son. But maybe you were unaware.”

He continued, “You shouldn’t be speaking that way, period. If you know that, why do that, man?”

A racist employee at a Dillard's in Dallas calls a father the n-word before being confronted by him in a very graceful way pic.twitter.com/W4mo6ygOio

The employee said the outburst was due to pain in his leg.

He resumed the rest of the conversation, “You don’t go from hitting your foot to ‘f—ing n—–.’ Life doesn’t work that way. This is repetitive behavior.”

The Dillard’s worker then answered that he’s worked at the store for over 20 years.

According to Dillard’s corporate office, “Homer” is no longer employed by the company.

“The allegations made against our former employee were promptly investigated, found to be in clear violation of our standards, and his employment with Dillard’s was immediately terminated,” said Dillard’s department store.

The allegations made against our former employee were promptly investigated, found to be in clear violation of our standards, and his employment with Dillard’s was immediately terminated.

Be that as it may, Karim revealed that his child is still traumatized by the interaction.

“I can’t allow for my emotions to overshadow them in this particular time,” Karim said of his children. “So, I’m doing the best that I can to protect them.”