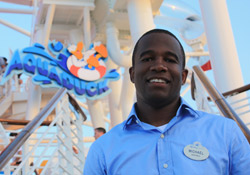 Disney Imagineer Davie is all smiles

Last week Disney set sail with the inaugural voyage of their third cruise liner, the Disney Dream. Consistent with their tradition,Â the companyÂ pulled out all the stops–including a christening of the ship byÂ Jennifer Hudson, Disney Dream emblems (even onÂ door stops) and exquisite food in their fine dining restaurants. But theÂ ultimate featureÂ was the incomparable AquaDuck, the first water slide at sea. It ran almost the full length of the cruise liner, sending riders 20 feet over the edge of the ship, giving them a panoramic view of the ocean before bringing them back in again.

The ship also comes complete with three recreational clubs: a nursery for toddlers, two activity centers for kids aged 3-10, an exclusive space on deck 13 for tweens ages 11-13, and Vibe, a trendy indoor/outdoor lounge for teens.

“When we started the project, the question to ourselves was, ‘What can we do to wow our audience and take the family cruising experience to the next level?’â€ says Michael Davie, one of the Disney Imagineers, whose team helped conceive many of these concepts on the Disney Dream. Davie, 39, was the lead project manager for designing the teen deck and the District, a collection of five sophisticated, adult-only clubs and bars on the ship. “We wanted to give the adults their own sort of playground just like the kids [have].”

Davie started his career as a civil engineer working for the Detroit Department of Transportation; but says heÂ rarely uses those skills as a project manager/Imagineer. He attributes his quick professional ascension to his willingness to embrace change and his eagerness to travel to wherever a project took him.

For example, as part of his responsibility to complete the ship, Davie moved his wife and two children to Germany 18 months ago and he is heading back there to help complete Disney’s fourth ship, the Disney Fantasy. The transition has been quite meaningful for not only him, but his family as well, he says. His children have had the opportunity to travel across Europe.

“I would recommend an international assignment to anyone [with kids], because, I think it exposes them to so much more than just living in the United States,” says Davie. “My kids have been to Paris, England, Barcelona, Spain, Italy… They’ve been in the Louvre and seen the Mona Lisa. I think that now they have a much more broader perspective to life.”

Here are three pieces of advice Davie has for other young professionals taking their careers and their families abroad.

1)Â Â  Â Be open minded. When you relocate things are going to be different. Different is okay. Embrace the change. Make sure you are open-minded to the way projects are managed and you will be successful.
2)Â Â  Â Ask Questions. That can be anything from where do you park your car while gone to relocating your pets, and who pays for your gas while you are there, or what is the exchange rate between your country and the visiting country. All of those things you need to be familiar with. No question is too trivial
3) Investigate Schools. If you have children and you are relocating, make sure you familiarize yourself with the schooling situation. Find a great international school where your kids can be successful.

For more great resources on vacations and traveling read: