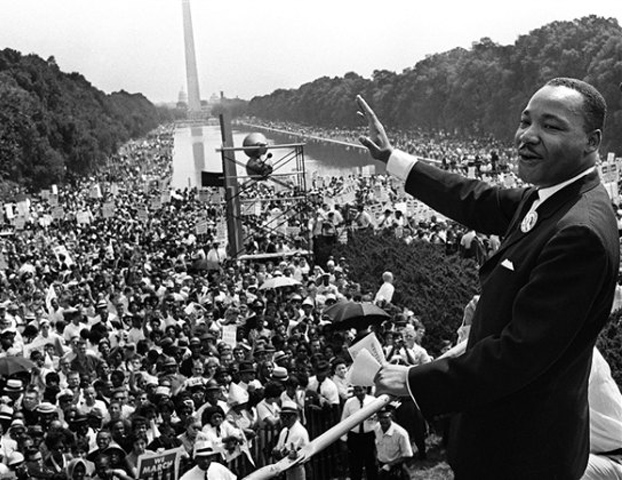 Rev. Dr. Martin Luther King Jr. at the March on Washington for Jobs and Freedom

The use of one of Dr. Martin Luther King’s speeches as a voice-over in the automotive manufacturer’s commercial during Sunday’s Super Bowl game drew swift rebuke from fans of the late civil rights leader on social media.

“I just heard the voice of the famous anti-capitalist Martin Luther King, Jr, preaching a sermon on service, superimposed over the images of white American military personnel on parade in dress uniforms, in order to sell Ram trucks. I understand sports ball is to blame,” said M. Pezzulo in a comment left on the video on YouTube.

Many comments on various social media channels also echo the same sentiment, saying it was inappropriate for Dodge to use King’s Drum Major Instinct speech—given in 1968, on greatness and service—to sell cars.

The commercial ended with Ram’s tagline, “Built to Serve.”

The King Center said on Twitter that neither the organization nor members of King’s family approved the use of the words or imagery for use in the ad.

Neither @TheKingCenter nor @BerniceKing is the entity that approves the use of #MLK’s words or imagery for use in merchandise, entertainment (movies, music, artwork, etc.) or advertisement, including tonight’s @Dodge #SuperBowl commercial.

Other comments said it was hypocritical of the NFL to allow such an ad while NFL players who kneel during the national anthem all year were heavily criticized as activists staged protests outside the U.S. Bank stadium.

Leaders of the Black Lives Matter movement and a coalition of other groups attempted to shut down several critical transit lines in downtown Minneapolis in order to protest police brutality and racism.

So Martin Luther King Jr. can be used to sell Ram trucks but not a single NFL player can #TakeAKnee to fight the very injustice Dr. King dedicated and sacrificed his life to fight. #SuperBowl

About 100 leaders representing the Movement for Black Lives, Black Lives Matter Network, BYP100, St. Louis Action Council, and the BlackOUT Collective wore t-shirts branded with “You can’t play with Black lives!” locked arms and formed a chain blockade on the tracks of the West Bank station near the U.S. Bank Stadium for about an hour, according to the Star Tribune.

The activists said they are using the moment to call attention to and stand with athletes who have knelt and protested racial injustice and police brutality against African Americans over the past two football seasons.

The City of Minneapolis had banned city residents without Super Bowl tickets from using the public transit—a move activists said primarily affected people of color who rely on it to commute to work.

Seventeen of the protesters who were arrested were later released with a citation according to the Star Tribune.

In a night already filled with controversies, the Pepsi Super Bowl halftime show didn’t disappoint either. While Justine Timberlake’s much-anticipated performance didn’t deliver on the hype according to some comments on Twitter, it was his tribute to Prince that drew ire from the late singer’s fans.

20 years before his projection appeared during Justin Timberlake’s halftime show, Prince made it clear how he felt about using technology to perform with an artist who had passed away. #SuperBowlhttps://t.co/Guxi2B6PlVpic.twitter.com/XwdIctpAt1

In a 1998 interview with Guitar World Magazine, Prince was asked what he thought about digital editing to “create a situation where you could jam with any artist from the past.”

“That’s the most demonic thing imaginable,” he said. “Everything is as it is, and it should be. If I was meant to jam with Duke Ellington, we would have lived in the same age. That whole virtual reality thing … it really is demonic. And I am not a demon. Also, what they did with that Beatles song (Free as a Bird), manipulating John Lennon’s voice to have him singing from across the grave … that’ll never happen to me. To prevent that kind of thing from happening is another reason why I want artistic control.”