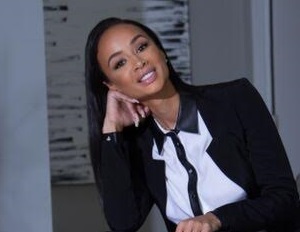 Life after reality television is nothing short of amazing for Draya Michele.

The former Basketball Wives: LA star’s upscale swimwear line, Mint Swim, is quickly becoming one of the most popular swimwear brands in the oversaturated swimwear market. Last year, Draya capitalized on that success by expanding the brand to include plus sizes and children’s swimwear, and a Mint Swim store (the brand is currently available online only) is on her list of goals.

Never one to be satisfied with current success, Draya is taking things to the next level in her acting career as well by pursuing meatier, more challenging roles. I recently chatted with Draya about her quest to conquer Hollywood, utilizing reality TV stardom to build an empire, juggling her career with her home life (she’s engaged to Dallas Cowboys cornerback Orlando Scandrick, and they have four children between them, including their nearly 5-month old son, Jru), and Basketball Wives.

Well, Mint Swim is just now wrapping up for the summer. And we’ve done Swim Week in Miami, and we showcased our 2017 collection, so it’s just a waiting game until January when we release, and I’m excited about the release.

On the possibility of a Mint Swim store:

A Mint Swim store is definitely in the plan, there’s just not a time set for that. I like selling online; there’s been a big demand for a store, an actual location, but just right now, I like being online. It’s kind of my thing.

On what stands out about Mint Swim compared to other celebrity swimwear brands:

I think that people believe it; they believe that I’m passionate about it, and I am. I think it’s genuine to who I am, and I wouldn’t start the company because I was popular, and I wouldn’t start the company just to make a quick buck or to say I have a business. It’s something that I love, and I live, breathe, and eat it, and I think that my supporters that follow me, they can see that and they can tell. So, Mint Swim is just a genuine company altogether.

On parlaying reality TV buzz into an empire (like her and NeNe Leakes):

You just have to find whatever it is you’re passionate about, and always keep in mind that reality TV is a stepping stone to get there. Reality TV cannot be your plan A; it has to be more of a plan B–and just get your business in line while you’re doing the show. It’s really hard to get out of the reality TV shuffle, and like you said, few are able to do it successfully, and the ones that are, they’re passionate. I’m passionate about all of the things that I do. I watch other people, like NeNe Leakes; it just seems like she’s a machine and she enjoys working, and that’s going to be what keeps her going because you can tell she’s very passionate about it.

I don’t listen or talk about it at all, and my friends and family, they know not to even go there with me–don’t question me about it, I don’t know what’s going on, I don’t watch it. So I like to keep that away, as far away as I can because when I hear about it, or even when I think about it, or even when I watch other reality TV shows, and I just see people going through drama, I just feel really, really bad. And it takes me to a place that I’m very far away from, and I don’t want to be back into.

On her relationship with Angel Brinks:

Absolutely, Angel is one of my closest friends, and yes we are still very close.

Oh my gosh, everything is so great with him. He is an amazing baby; he is a great baby. He’s a big baby– he was born a little bit early, and he wasn’t small at all from it, so he’s big for his age. I love being a new mom all over again; it’s really fun. I have a lot of help from my big son [13-year-old Kniko]. I would say he looks pretty much, Orlando is going to kill me, he looks like me.

On juggling career with her home life:

It’s really hard, and Orlando and I have just come to the conclusion that we have to set time for each other, for our kids, and for our family. So that’s what we’ve been doing; we work on our time management, and make sure we have time for our kids.

No, we’re still taking our time. This is my fiancÃ©’s comeback year from an injury, so we want to just make sure everyone is in a great career position before we go through with planning all of that stuff because we’re both very busy right now. I just couldn’t even imagine adding wedding planning to my already full plate.

On what’s next for her:

Black Enterprise contributor Mara (The Hip-Hop Socialite) is a headline-grabbing entertainment journalist, radio personality, and creator of “The SCOOP”, an international entertainment news and lifestyle column.Â Follow her on TwitterÂ  @HipHopSocialite.Â