Title I of ESEA is the primary source of federal funding for schools with high concentrations of poverty. The purpose of Title I, particularly its school-wide program, is to allocate more money to schools that have concentrations of low-income students.

As discussed in Fact 8, low-income students are more likely to struggle in school and require additional support. However, the negative trend in figure 7 (below) shows that states which have greater numbers of low-income students receive less Title I funding per eligible student. You would think if you had more poor students, you would receive more of the funding whose purpose is to assist them; but actually the opposite is true.

Because Title I is the primary mechanism for the federal government to distribute school funds across states, this negative relationship–the fact that states with fewer poor students gets more antipoverty funding than states with more poor students–is counterintuitive and suggests that the funds may not be targeted appropriately in the status quo.

The negative relationship between the share of students eligible and funding per eligible student is due in large part to the interaction between Title I’s chronic underfunding and the complex Title I formulas that distort allocations in the absence of full funding.

For example, to fully fund the Basic Grants portion of Title I in 2015 would have required $50 billion in allocations; Congress instead appropriated only $6.5 billion.

A new Hamilton Project policy proposal by Nora Gordon, “Increasing Targeting, Flexibility, and Transparency in Title I of the Elementary and Secondary Education Act to Help Disadvantaged Students,â€ discusses the causes of this dilemma and offers potential policy solutions.

Gordon explains that a small state minimum leads to states such as Vermont receiving a disproportionate level of Title I funding. Additionally, a provision known as hold harmless, which allows districts to continue to receive allocations based on allocations received in previous years, prevents Title I funding from adapting quickly to structural changes in poverty levels across states and districts.

Bottom line: To supplement your child’s schoolwork, make use of free resources–such as museums, the public library, and community educational offerings. 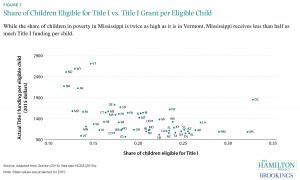