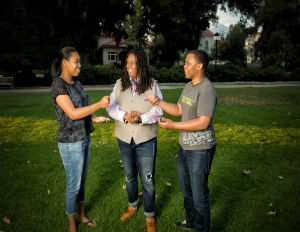 CGI America recently held its annual conference, out of which several exciting big ideas in education have emerged. Once a week over the next several weeks, BE SmartÂ will explore one of the big ideas that resulted in a CGI Commitment to Action.

BE Smart: This CGI Commitment is called #BeReal: Critical Mentoring for College Success. What is critical mentoring?

Weiston-Serdan: Critical mentoring acknowledges that the traditional way we mentor isn’t conducive to black or brown young people or others who are marginalized or ‘minoritized,’ such as LGBT youth.

Traditional mentoring is one-to-one hierarchical: ‘I’m an authority figure and I’m going to tell you what you need to do to get on track.’ That’s an antiquated idea for our young people today, and it doesn’t include any analysis of their context.

How that relates to college access means talking about what it means to go to college, what they can expect once they get there, attending a predominantly white institution vs. a historically black college, what it means to become a black or brown academic–having conversations that mentors and protÃ©gÃ©es don’t currently have, or not in a way that’s built into the structure of the program the way we’re suggesting it should be.

Young people think college is a way out, but then they get there and they’re unable to process what they’re going through–the microaggressions and other things on campus they didn’t expect and for which the mentoring relationship didn’t prepare them. They didn’t have conversations about college not necessarily being about making it out of the ‘hood’ or turning your back on where you came from.

We need to alter the mentoring relationship in a way that starts to help young people to process the trauma, race issues, and other systemic problems that they’re handling.

And it’s not just about having those conversations. It’s also about helping mentoring programs to recruit more diversely and making the organizations more youth-centric so students have voice, place, and agency.

How are the partnerships important to this CGI Commitment to Action?

Summer Search is a critical partner. This organization works with marginalized youth to help them get into college. In the summer students do special activities and are prepared for leadership.

They focus specifically on college access, so they help us connect with other college access organizations to talk about how to make their programs more culturally relevant. We need to prepare students not just academically,Â but to help them cope. That’s why we want to equip college access programs to retool.

Another critical partner is Mentor, where most youth development organizations go to access guides, resources, and materials. It’s kind of a central space to access resources and training.

Amped Strategies, based in Philadelphia, is noted as a space for facilitating training and developing curriculum. They’ve already been all over the country delivering training to effectively mentor boys and young men of color.

We’ll be developing a set of training and curriculum materials. Then we’ll start hitting the road and helping mentoring and youth development programs to understand cultural relevance and critical race issues and help them to have more critical conversations with their protÃ©gÃ©es.