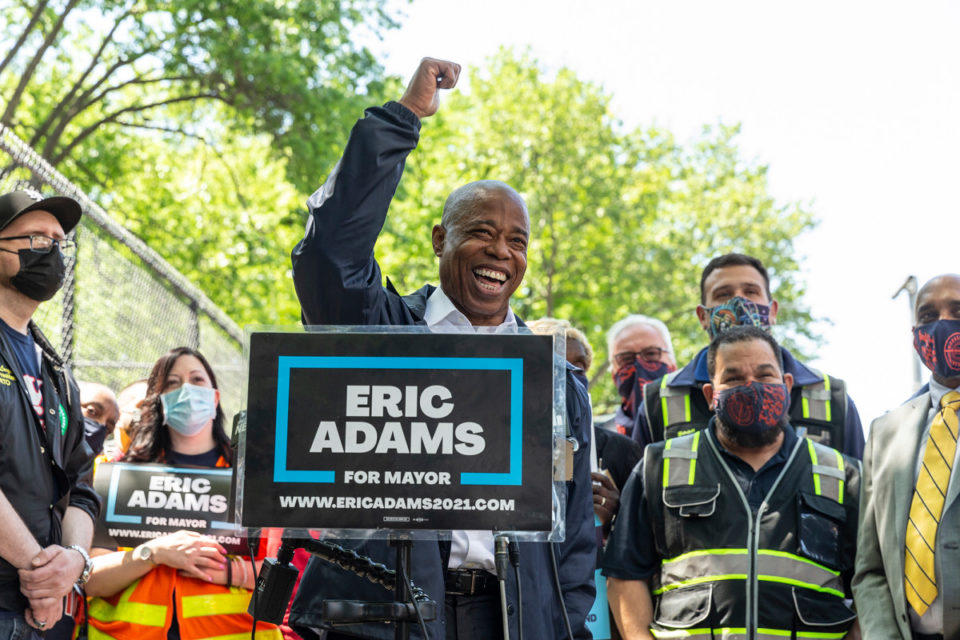 *This is part of a series on the New York City Mayoral Race. Black Enterprise will talk to the top Democratic candidates and give our readers a chance to get to know them and their agenda. In this series BLACK ENTERPRISE has Interviewed Dianne Morales, Maya Wiley, Shaun Donovan, and Kathryn Garcia.

Eric Adams was a typical kid living in Brooklyn and Queens. He played sports with his brother, took public transportation and went to public school. However, when Eric and his brother were arrested as teenagers, the moment changed his life.

“My brother and I were arrested and assaulted, badly, by the two arresting officers.”

Rather than let the beating he took turn him to a life of hating the police, Adams became one, serving 22 years on the force and working his way up to captain. During his time on the force, Adams saw and noted widespread inequities.

Now Adams wants to change the city and make it fair for everyone.

“The goal is really to end the inequalities and injustices that we create in our city,” Adams told BLACK ENTEPRISE. “The city has betrayed Black, brown and immigrant people for far too long.”

Being a former NYPD officer, Adams had a unique perspective on the city last summer when millions marched for Black lives at the same time police were condemned for being brutal, unforgiving and unnecessary agitators. Adams wants to change public safety and policing, but for him defunding the police has nothing to do with it. The larger issues are the city’s long-term inequities that lead to violence.

“Defund the police is a slogan and slogans can’t be public safety,” Adams said. “The prerequisite for prosperity is public safety. We just had a shooting where a mother was shot point-blank by her ex-lover and murdered. She wasn’t shot by a cop, she was shot because someone had easy access to a gun.”

That doesn’t mean Adams wants to keep the NYPD the same. Adams says he wants to make changes within the department such as stripping police from certain responsibilities like mental health checks; appointing the first female police commissioner, and publicizing the NYPD list of officers with records of complaints and bad behavior.

The coronavirus pandemic was devastating to the city, as stores were closed, people lost jobs and entertainers and artists lost their dreams and the city went to sleep. Now that the city is reopening, it’s time for the recovery.

However, Adams knows the inequalities in education, housing, and the city’s economy were problems before the pandemic and he wants to make sure they’re never problems again.

“I heard one candidate say they want to bring the happiness back to New York City and that is a clear example of them not knowing the city because there is a substantial number of New Yorkers who were never happy,” Adams said. “COVID may have amplified what they were going through but pre-COVID 65 percent were not reading-proficient in the Department of Education, homelessness is a problem, public housing is hurting and gun violence is prevalent.”

Adams has a lot of changes in mind when it comes to how the city serves its residents and it starts with the basic services residents need. The internet has moved signing up for SNAP benefits, starting and registering a small business and applying for public housing to digital applications.

However, these are still slow, time-consuming processes that require a significant amount of information and patience and knowing the right people. The city’s digital divide adds yet another degree of difficulty to these operations for low-income and immigrant residents.

Adams wants to simplify these processes with his My City card. Instead of filling out online applications and hoping your information is correct, the My City card will make it easier to sign up and receive benefits, city services and apply for licenses and certificates.

“The My City card is one of my most important initiatives, although the city has information on all of the city’s residents, we compel citizens to go from A to Z to get the benefits they are afforded,” Adams said. “My City card will allow residents to have all their information in one year and the city will automatically sign residents up for benefits, for WIC, SNAP and public housing. You shouldn’t have to wait for the government to deal with that when we have your information already.”

The former officer has a bevy of endorsements including Friends of Chinese Americans, Grand Council of Guardians, Italian American Political Action Committee, the Jewish Press, and the New York Daily News (No. 2  in ranked-choice voting).

Additional plans for New York City include a quality education for all city children, affordable housing and revolutionizing NYCHA.

When the Marist College alum isn’t campaigning, he loves riding his bike around the city and is also a plant-based eater who enjoys cooking.

“I enjoy riding around the city because it’s a different vision when you’re riding,” Adams said.

Adams believes its high time big cities stop being reactionary to their problems and begin preventing them before they start, and he wants to be the guy to do it. Some of the public figures who are endorsing Adams include Reps. Adriano Espaillat and Thomas Suozzi; Bronx Borough President Ruben Diaz Jr. and Queens Borough President Donovan Richards.

“All we do in big cities across America — Chicago, Atlanta, Detroit — is hang out downstream in the river and pull people out of the river and they’re mostly Black, brown and immigrants,” Adams said. “It’s actually cheaper to stop them from falling in. It’s cheaper to educate someone, deal with mental health and feed our children healthy food instead of pulling them out of the river downstream, when they’re arrested or homeless or have diabetes.

“It’s just that there’s no incentive to do it because the people who are being pulled out of the river are Black brown and immigrants and the people who make money from that aren’t Black, brown or immigrants. So it’s time to take our cities upstream and prevent these issues.”