Facebook Live: How the NBA Is Cultivating Millennial Basketball Fans 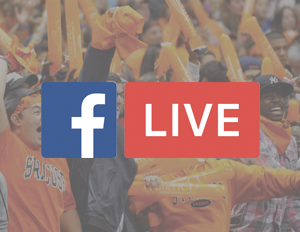 This basketball season has truly been exciting, with March Madness revealing itsÂ top teams–Gonzaga and North Carolina–to theÂ perplexing standing of the 2016 NBA Finals Champions (Cleveland Cavaliers) presently at No. 2 Â in the Eastern Conference.

Yet, in all of the excitement of who are the victors are in the 2016-2017 basketball season, a budding question comes to mind,Â “How are millennials watching their favorite basketball teams play?”

In promos and commercials announcing upcoming team match-ups, you might have noticed heavier promotion for games that are streamed live via various platforms. Well, the platform that millennials seem to be engaging with most is Facebook Live.Â According to Mediakix, livestreamed videos are viewed in much higher durations than previously recorded content on Facebook. Â Facebook’s investment in video technology and live video content serves as a strong indication of the direction Facebook thinks social media content and user behavior is heading.

One of the basketball leagues that have taken notice to this is the National Basketball Association (NBA) minor league, NBA Development League (NBADL). Â For the 2016-2017 season, NBADL has decided to “go where the millennials are,” and stream the majority of its games via Facebook Live.

“Right now we have the opportunity to connect with core NBA fan and try and gain new fans by leveraging our footprint on…Facebook Live. Â That’s been a great way for to tie in the storyline from the NBA teams that are affiliated with NBA Development League teams.”

Recently, I had the opportunity to catch up with George Wilson, director of business operations at the NBA Development League, to learn more about tthe league’s strategy for incorporatingÂ streaming platforms to reach millennial and general audience fans.

Check out the interview below:

5 Things You Need to Know About Equal Pay Day