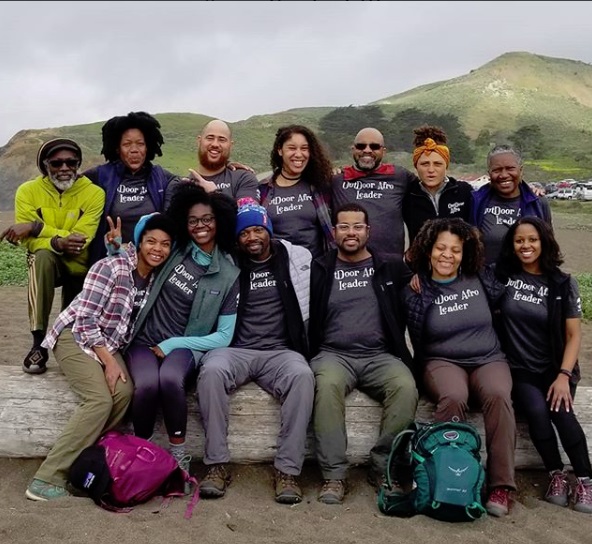 In June, a group of black travelers scaled 19,341 feet to the summit of Mount Kilimanjaro in Tanzania. The adventure was organized by Outdoor Afro, a “network that celebrates and inspires African American connections and leadership in nature,” according to its website.

One of the hikers, Leandra Taylor, provides an account of the experience to wellandgood.com. Here is an excerpt:

“We were headed to the Lava Tower [15,000 feet] that day, and the hike was finally catching up to me. This was one of our longer hikes and the distance that we were planning on going should have taken us 4-6 hours, but at the 7 hour mark, we were only about half way. I was on my period, so I felt cramp-y and emotional during our lunch break, but I was also just physically exhausted.

Eventually, we had to descend a rock wall, and it was a worst-case scenario for me because of my fear of heights. When I tried to get down, I could feel a panic attack brewing: I thought, ‘I could lose my footing and fall down.’ All of my teammates were well aware of my anxiety by this point, and they were just behind me and supporting me. But as the light started to die down, I was getting more and more panicked. I just kept repeating to myself, ‘I am strong. My body’s strong. My legs are strong.’ I ended up making it to camp, and setting up my tent with the help of my troop.”

The team’s rigorous expedition schedule is on Outdoor Afro’s site:

Day 1:  Pick up from the Kilimanjaro Airport and drive to hotel in Arusha.

Day 2: Set off climbing gently through the south-western slopes of the mountain. This is old growth montane forest, carpeted with unique “busy lizzie” flowers, begonias and ferns. First camp among the giant heather at 9840 feet. A 3,936 foot ascent and six hours walking.

Day 3: Emerge from the forest into the giant heather zone and onto fine open moorland. There are fascinating geological features in the old volcanic caldera. After 3,000 foot ascent and 4-6 hours walking, the team will arrive at camp 2 by the Shira Cave at 12,500 feet.

Day 4: On this day, the team will climb to almost 16,000 feet, but will end the day around the same elevation they started. This helps with acclimatization.  They will climb towards the main peak Kibo, with the western glaciers clearly visible across the rugged high-altitude desert of volcanic rocks and boulders.

Day 5: Climb steep to the Barranco wall with some sections of very easy scrambling and then drop down again to the Karanga Valley.

Day 6: Climb above Barafu Hut perched high on a rocky bluff at 15,580 feet. There will be fantastic views of Mawenzi peak in the distance.

Day 7: An early 2-3 a.m. alpine start to climb the steep frozen scree. They will aim to reach Stella point at 18,600 feet, on the crater rim for a rest and hopefully sunrise, then continue another hour to the highest point on the continent at 19,345 feet; usually in warm sunshine.

One of the hikers spoke with ABC News about how he prepared for the daunting climb. “I would go on 6.5 to 10.5-mile hikes carrying packs with weights on my back once per week,” said Olatunde (Ola) Gholahan.

The number of black people traveling has steadily increased the last several years. Millennials of color are particularly interested in exploring the farthest reaches of the globe. Several travel startups have emerged; many of them catering to Millennial wanderlust.

Evita Turquoise Robinson is the the 34-year-old founder of Nomadness, an organization with the purpose to “show the world that travel has no racial, gender, religious, economic, or interest limitations.” The Nomadness community is 20,000 members strong across social media.

Sister Traveling Solo is a company founded by Coleitha Banks to assist and encourage women of color to travel solo. Haywire Weekend is a luxury travel site targeted to diverse Millennials.