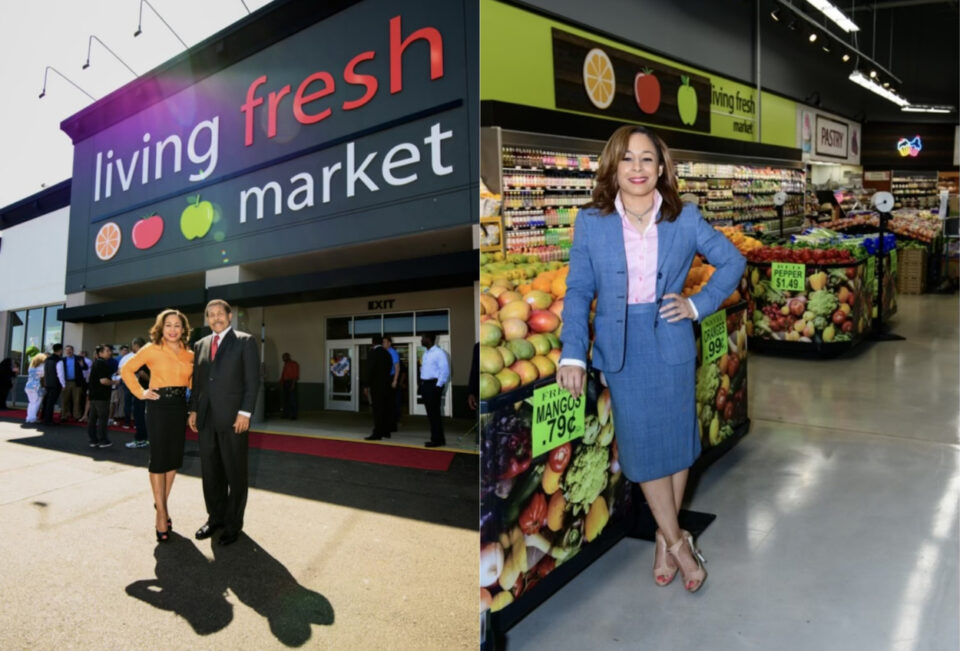 Officials from Forest Park Plaza LLC, a wholly-owned subsidiary of Living Word Christian Center, the company that owns and operates the 33-acre outdoor shopping, dining and worship center at 7600 Roosevelt Road in this suburb five miles west of Chicago, announced today that they have acquired Living Fresh Market, the 70,000 square feet supermarket that has been one of the anchors in the plaza for the past four years.

Living Fresh Market was opened in May 2018 by Dan Casaccio, a member of a family who has been in the grocery business for nearly a century. It replaced Ultra Foods, which left a big void in the access to fresh food and produce when it closed four years ago in this racially and economically mixed village of about 14,300 residents.

The new owners, Dr. Bill Winston and his family, purchased the plaza in 1997. With the change in ownership, the Winstons become one of a handful of African Americans across the nation who own a large, full-scale supermarket.

The change in ownership comes during a volatile period in the food retail industry as a number of major supermarket chains, such as Whole Foods, Save-A-Lot, SuperValu, Aldi, Walgreens and even Walmart have closed grocery stores across the nation, including urban areas that were classified food deserts.

In early 2020, with the onset of the global coronavirus epidemic, the grocery business fell into a tailspin. On one end, the business has been robust as the demand for food and other essentials increased, while on the other end, challenges have arisen with worker shortages, food production and the delivery of those products.

But the food retail industry has balanced the uncertainties better than most industries, according to a newly released Axios Harris poll. Grocery stores received some of the highest ratings for reliability when it comes to customers gaining access to the products and services they need.

This current market climate bodes well for the Winstons, who have established a leading brand in the region for growth and prosperity over the past two decades. In addition to Living Fresh Market, the plaza is also home to Home Owner’s Bargain Outlet (HOBO), a family-owned, factory-direct home improvement retailer; the Carver Innovation Center, one of only five fab labs and maker spaces in Illinois; 28 To Brush Dental, Portillo’s Hot Dogs, Enterprise Leasing, Taco Bell, America’s Best Contacts and Eyeglasses, Royal Christian Bookstores and Cafés, Liberty Bank, Planet Fitness, Principle Dance and Ashley Stewart.

Melody Winston, director of Real Estate, Operations and Construction for Forest Park Plaza, said the family decided to venture into the grocery business because the opportunity presented itself to expand their portfolio of businesses and make an impact in the community they have served for the past 24 years, starting when Dr. Winston purchased a declining shopping plaza in 1997 to house the church he founded and serves as senior pastor, Living World Christian Center, one of the largest churches in the nation.

“Our goal is to present the community with the best supermarket experience,” Winston said.

“We will provide the fresh meats, produce and high-quality products that meet the needs of the community. We will upgrade the store, incorporating the latest technological innovations in the supermarket industry, such as Instacart, and we will stay engaged with our customers.”

Winston said the renovation has begun, but the grocery store remains open during the transformation under the temporary name Joseph Fresh Market LLC. Part of the new-look includes converting 10,000 square feet of the grocery store into a marketplace for new vendors to display their products. A ribbon-cutting ceremony is scheduled for the Labor Day weekend.

“There are people trying to get products on the shelves of a grocery store,” Winston said.

Another rewarding part of this whole experience, Winston said, has been hiring new staff.

“We have some great people,” she said.

“I have managers in each department. We even have an old-school butcher.”

Forest Park Mayor Rory Hoskins and Representative La Shawn Ford (D-8th) said the acquisition by the Winstons is good news for the community and area.

“I am grateful for them stepping in that arena to do what is best for the community,” Ford said.

“They are making a sacrifice. It is truly not a business they are looking to get rich in. It is really the mission to provide the community with what it needs, so they can be commended for this.”

As the major chains abandon some communities, the Winstons are part of a new movement of Black entrepreneurs stepping up to acquire supermarkets. This is happening in Houston, Oakland, Detroit, Washington and even Chicago.

“This is a model for Chicago and for urban communities to have small business owners, who are not connected to the big chains, opening supermarkets in communities,” Ford said.

“They are vested in the neighborhoods, not like the big chains that come and go, because the reliance or real science of their success is not the local market, but the big stage. They have grocery stores in many states and if they are failing in other markets, it brings down their profit margins and forces them to close in other areas.”