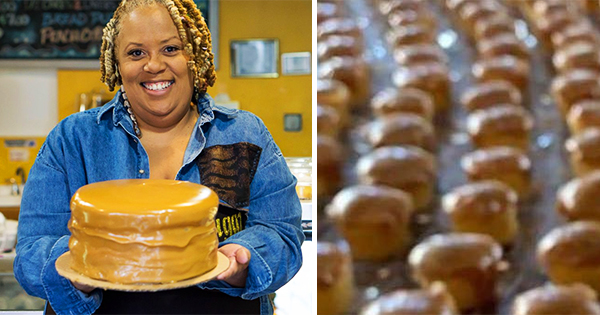 Stephanie Hart, the owner and founder of Brown Sugar Bakery in Chicago, is buying out a historic 84-year old candy factory called Cupid Candies. To finalize the acquisition, she is using the funds from a $500,000 small business grant that she recently received from the state of Illinois.

In 2004, Stephanie opened Brown Sugar Bakery, which quickly became one of the most popular destinations for Black food culture in the city. It started with one location but has since grown to three locations in the local area

Stephanie had been planning to grow her business even more so when she heard that John Stefanos, the owner of Cupid Candies, wanted to sell the business, she immediately began taking steps to make the purchase. According to The Chicago Sun Times, she applied for a grant from the Illinois Department of Commerce and Economic Opportunity and was approved for the maximum state grant of $500,000 – the exact amount needed to seal the deal.

Wth the funds, Stephanie is able to acquire, not just the rights to the company’s brand and products, but also the equipment and the building. Ultimately, she will combine the two brands together which is why she is keeping all 20+ employees on staff. Their new job will be to continue to produce all the ice cream and chocolate products of Cupid Candies, as well as the cakes of Brown Sugar Bakery. They will also integrate some of the ideas to create new dessert ideas.